Because, Your Honor, the Defendant is a Fucking Moron 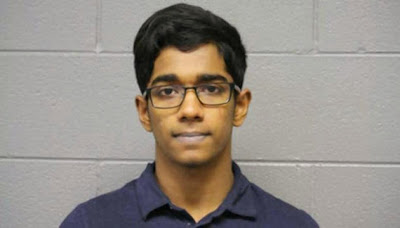 When contemplating the many factors that are leading America towards its own spectacular downfall, one must maintain one's sense of humor lest depression grip ahold of one like a giant vice and squeeze all remnants of sanity from one's mind. Keeping that basic rule in mind, I'm always on the lookout in the news for a good laugh that might leave others who remain blissfully unaware of where our country is heading scratching their heads. Today's such story features a student from my graduate school alma mater, the University of Illinois at Chicago, who decided it might be fun to reenact scenes from the inexplicably popular 50 Shades of Grey.

I've not seen the movie, nor likely will I ever, but thanks to its ubiquitous presence in the media right now even I know enough about its plot to realize that if the idea of recreating its graphic sex scenes turns you on it would probably be a good idea to clue in your intended partner and obtain her consent. Alas:


Hossain used a knit cap to cover the woman's eyes, Karr said, and removed the woman's bra and underwear. He then began striking the woman with a belt. After hitting her several times, the woman told Hossain he was hurting her, told him to stop "and began shaking her head and crying," said Karr.

Hossain continued striking the woman — including with his fists, according to an arrest report — and she managed to get one arm, and then another, free. But he then held her arms behind her back and sexually assaulted her as she continued to plead for him to stop, according to Karr.

During police questioning, Hossain reportedly admitted the assault and "doing something wrong" but said he and the woman had been reenacting scenes from 50 Shades of Grey.

Okay, so far it is yet another grim story of a male college student who thinks his female classmates are there solely for his own sexual gratification. Nothing funny about that, until I came to this quote that demonstrated the cluelessness of the judge assigned to the case:


After public defender Sandra Bennewitz noted Hossain's record of student leadership, Judge Adam Bourgeois Jr. responded: "Sandra, how can someone involved in all that let a movie persuade him to do something like this?"

Because your honor, he's obviously a fucking moron. It doesn't matter that he's a college student and not just pumping gas or flipping burgers for a living, nor does it matter how good his grades are or what "leadership" activities he's supposedly engaged in. Nope, being a modern day American means being well trained by Hollywood and the media in monkey see-monkey do. Hossain is in fact not at all different than the moron from Indiana who recently got so riled up after watching Fox News (while consuming 45! beers) that he went out and set a nearby mosque on fire.

I guess what amazes me is that a judge in this day and age could spend years on the bench watching as a parade of American losers passes before him and remain credulous that being a student in our completely broken higher education system might render one immune from being stupid enough to imitate something he saw in a popular a movie. It's the ability to engage in critical thinking, not IQ level or formal educational achievement, that prevents such stupidity, and America's modern education system is specifically designed to snuff out or at least prevent the development of a student's ability to think critically. Students are repeatedly told to get good grades and standardized test scores and not rock the boat, or they won't be able to get a good job when the graduate--trouble being that those who are capable of critical thinking tend to be boat rockers by their very nature.

So yes, your honor, the defendant's excuse is that he's a typical American moron who happens to have lower than normal impulse control. Really, he's not so unusual at all.


Bonus: Bill's likely review of 50 Shades of Gray likely would have been the same as it was years ago for Basic Instinct: "Piece of shit"