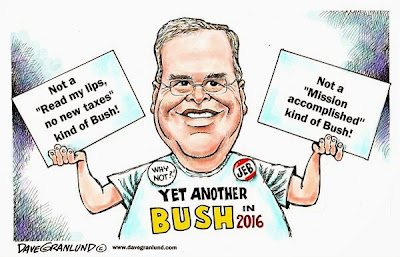 Nevermind that we still have over 22 months yet to endure the presidency of the man once known as Hopey-Changey, the political heavy hitters (and those who’ve deluded themselves into thinking they are heavy hitters) are already lining up to replace him. The one guarantee is that no matter who might come out on top in the November 2016 voting, nothing will fundamentally change in the lives of those non-billionaires delusional enough to participate in the balloting in the belief that it will. Nevertheless, being a former political science major I just can’t help myself when it comes to elections—I simply have to analyze them despite knowing that they have become a total sham giving Americans the illusion that they still have a real choice.

On the Republican side, it is worthwhile to keep in mind that despite couple of rouge billionaires’ attempts back in 2012 to rock the nomination process by backing and giving brief life to the likes of Herman Cain, Newt Gingrich and Rick Santorum, the ultimate result was that the party establishment got the candidate it wanted—just like it always does. All you have to do to see what a lock the party establishment has is to look back on the nominees of the past 35 years.

In 1980 the establishment lined up behind Ronald Reagan, not only because he was viewed as malleable and thereby a safe choice, but because it was “his turn” after he had narrowly missed knocking off accidental incumbent Gerald Ford for the 1976 nomination. In 1988, George Bush senior was the establishment’s guy after he spent eight years in the vice president’s office carrying water for Reagan and doing penance for his “voodoo economics” comment during the 1980 campaign.

So where does all of that leave the Republicans as we head into 2016? Well, let’s start with Chris Christie, who was probably the establishment’s preferred candidate until he goofed by being publicly exposed as a man unable to control himself from using his power against those with whom he has petty grievances. Not that Republicans have any qualms about abusing executive power, just that potential nominees need to adhere to the "Nixon rule" and do so by being nimble enough not to get "caught."

Meanwhile, Rand Paul (the "W" to Ron Paul's "HW") has been desperately trying to balance being the guy who can lock down the surely libertarian vote while winking and nodding his willingness to go along with the party's belligerent foreign policies. Unfortunately for the namesake of the Atlas Shrugged scribe, there is far too much distrust of him and his truly libertarian father and their previous lack of demonstrated enthusiasm for America’s quite profitable imperial misadventures.

Scott Walker, on the other hand, is the Koch Brothers’ preferred stooge who'll have some potential viability if the Democrat's favorite billionaire boogeymen put a huge amount of money into his campaign. Too bad though for Governor Union Buster that the Kochs do NOT necessarily represent the party establishment, and hence Walker could well be this year’s version of Rick Santorum--a tiresome monkey wrench who keeps the horserace going past early March.

Bobby Jindal, Marco Rubio and Ben Carson might be this campaign’s great Republican minority hopes, but each seem to be viewed as far too lightweight to be considered anything other Veep possibilities. Mike Huckabee is again hovering around with more than nominal support in the polls--no doubt from Christian conservatives--but it is hard to see the big money boys lining up behind the false prophet from Arkansas. Then you have Tea Party favorite Ted Cruz, who seems to sense that without the big money behind him he has no realistic chance. Or it could be that he just prefers being a Senator--where he can grandstand all he wants without ever being held accountable for anything.

That leaves one man standing: Jeb Bush. Funny that were it not for his now infamous last name, the same last name that allowed his imbecilic older brother to walk to the 2000 nomination, Jeb would be considered just as much of a shoo in for the nomination today. The Jebster and the establishment are in fact so desperate to disassociate him with past Bush family disasters that he even recently came out and tried to distance himself from his old man and his brother by laughably claiming that he would “be his own man.” Are the American voters really dumb enough to believe that load of horseshit? Why yes, of course they are.

So the $64,000 question is: can the Republican Party establishment overcome all of the resistance within the party that yet another Bush family candidacy (which would be the FIFTH in the past 28 years) will no doubt encounter from Tea Partiers and libertarians? Well, they were able to use their vast monetary resources—which are even more unlimited these days thanks to the Citizens United decision—to put the former governor of America’s most liberal state (and who as governor enacted his own version of Obamacare) over the top in 2012. However much the Tea Party may howl and the libertarians may sulk, the view of the establishment remains that putting forward one of those factions' darlings as the nominee will result in an electoral disaster--and they also might prove not completely reliable in the unlikely event that one of them was actually able to knock off Queen Hillary next year.

Hence, as of right now it would appear that Jeb Bush will likely be the Republican nominee in 2016. He already has a small lead in the nationwide polls, though it should be noted that Walker is currently ahead in Iowa. But as with the Democrats, it will be the ability tap into the really big money and saturate the airwaves in early primary states with teevee ads that will ultimately decide this nomination. More on the alleged people's party nomination tomorrow.