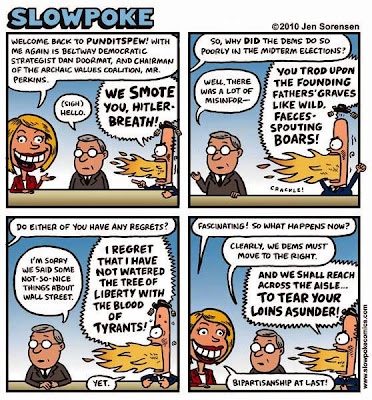 Despite its proximity to the nation's power center, the Commonwealth of Virginia is actually something of a political backwater. The federal freakshow in Washington seems to suck all the air out the state's politics, and as a result its "leaders" are largely ignored, except when they engage in some spectacular assholery (I'm looking at YOU, Erc Cantor, George "Macaca" Allen and Governor "Jailbird" McDonnell). Though the Old Dominion is known for the incredible array of Presidents who hailed from the state in the late 18th and early 19th centuries, the days when dinosaurs like Washington, Jefferson, Madison and Monroe walked the land are long over. The last national politician of any real stature to hail from Virginia was that cretinous old liberal interventionist, Woodrow Wilson, and he hightailed it to New Jersey long before his political career began.

In other words, Virginia politicians have to work extra hard to get noticed at the national level, so when one of them starts to get the stirrings in his loins aspiring to higher office it might just be worth paying attention to the man. I'm referring, of course, to our illustrious senior Senator, Mark Warner, aka "the Senate's richest man." Warner, you may recall, or likely not if you don't live here, first won his senate seat in 2008. Running alongside the "commie socialist Nazi" Obama he manage to score 65% of the vote, sweeping most of the Commonwealth's counties in the process except for a few Appalachian backwaters in southwest corner of the state. Warner's stature a rare popular southern Democrat secured him a spot delivering the keynote address at the 2008 Democratic National Convention that, of course, nominated Obama.

Given that he remains the most popular politician in Virginia, that Virginia's former Republican governor was just convicted in a tawdry corruption scandal and that the GOP is basically conceding the race by putting up a lame Washington insider to run against him, you'd think Warner would be content to cruise effortlessly to his second term. But that's not what's happening.

Starting right after Labor Day, Warner's campaign has been flooding the airwaves with teevee ads. That's not so unusual in and of itself, except for the content of those particular ads. Instead of touting his record in supporting Democratic initiatives, Warner has been trumpeting his efforts at "deficit reduction" (read: screwing benefits for the middle and working classes) and also just how great he is at "crossing the aisle" and working with Republicans. Never mind that most elected Republicans these days are either bug fuck crazy, or have to act that way to appease their constituents. Nope, in Senator Warner's estimation, it's his own enfeebled party that has a bad case of the cooties. Heck, whenever he sees Harry Reid coming down the sidewalk towards him, Senator Warner makes sure he crosses the street lest he be accused of hanging out with his own Majority Leader.

So what's really going on here, anyway? Warner has to know that such a campaign is perfectly designed to turn off his liberal and progressive supporters. So why is he doing it?

Because, dear friends, Senator Mark Warner is not really running for 2014 but for 2016. You see, when Hillary Clinton accepts her belated coronation from an ungrateful Democratic Party that should have bowed to her supreme highness in 2008, she's going to need a running mate to "balance" her ticket. And who better to do that than a "moderate" southern senator who routinely wins over 60% of the vote and will work hard to ensure the vital "purple" swing state of Virginia stays in the Democratic column.

But first, in order to ensure he gets queen Hillary's blessing, prince Warner must ensure he scores that plus-60% election victory once again. So his political advisers, cynical bunch that they no doubt are, are betting that their strategy will win more votes among the both disaffected Republicans and independent librul hating yokels than they will lose by turning off his base voters, who, after all, will have no other choice (other than staying home).

Warner's campaign also fits hand-in-glove with the way Hillary has been positioning herself by running to right of Obama, blasting the president for not having a more belligerent foreign policy. Never mind that the warmongering policies she endorsed as Madame Secretary effectively destroyed the nation-state of Libya and helped lead to the rise of ISIS in Syria and Iraq. More guns, more bombs, more drones, more killing, more state inflicted terrorism--THAT'S what the Middle East really needs.

And you know what? Unless the economy completely craters during lame duck Obama's final two years in office, it's going to work. Queen Hillary will be coronated on January 20, 2017, and there is a very good chance that the former richest senator, who wants to slash any sort of program that helps anyone who isn't a telecom mogul like he is, will be standing by her side, one heartbeat from the top job. And thus will America get six MORE grueling years of what it has been getting ever since the Supremes elevated court jester Bush to the throne nearly 14 years ago.

May (you own favorite deity) help us all.


Bonus: Here's fellow Virginian David Lowery and his band Cracker (and the Drive by Truckers' Patterson Hood) with a little ditty that may or may not (but probably doesn't) apply to Hillary and Warner