"Glad it Isn't Me," and Other Evil Thoughts About Cancer 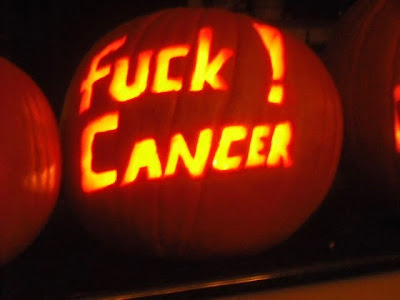 About ten years ago, I had a professional colleague who went in for routine surgery only to find out she had about a fist-sized tumor lodged firmly in her stomach. Four months later she was dead at the ripe young age of 53. To make matters even shittier, she was less than two years away from retirement when she died and she and her husband were already in the process of building their dream beach house. The last time I saw her was when she came in for the office Christmas party about a month after she was diagnosed. There was all kinds of happy talk about how she was going to beat the cancer, but as she went to hug me goodbye that afternoon I could see the stark fear in her eyes. Of course, I told her I would see her when she was well again and all that happy nonsense. But what I really remember was thinking, "glad it isn't me."

For a long time I felt bad about that. Or when a few other people I knew got the disease in recent years--or when another colleague's father contracted ALS (a worse disease than cancer since it doesn't even give you the courtesy of a fighting chance) and that same damn thought popped uninvited into my head.

Flash forward to exactly 19 months ago, and all of the sudden it WAS me. There I was, sitting in an examination room at a very prestigious cancer specializing hospital, being told I had a massive tumor on the head of my pancreas--Stage 3, inoperable. Oh, and my life expectancy at that moment was approximately 11 months.

When my diagnosis became generally known among those who know me in meat space, the reaction was overwhelmingly supportive. Even a number of people I considered to be just casual acquaintances were effusive in their expressions of sympathy, and I was damned appreciative of every last such utterance I received. It went a long way towards helping me through the bad times--six months of chemo, six weeks of radiation treatments and a surgical procedure (those first two might have really sucked but they shrank the tumor just enough that it just barely became operable), that until just recently itself had a 15% mortality rate. But I know many of them had to be thinking that same horrible thought that never gets expressed when discussing potentially fatal illnesses.

During this awful time, I've come to know and become friends with numerous other cancer patients and "survivors," some of whom have unfortunately already lost their battle and are, as the trite expression goes, no longer with us. One guy who is still alive and kicking is the husband of a friend of my wife who contracted Stage 4 lung cancer four years ago even though he never smoked a day in his life (hello, Walter White!). I first met him a few days after my diagnosis, and one of the very first things he said to me was "Welcome to the club!" At first I was taken aback by how rude that sounded, but I quickly learned to appreciate the true fighting spirit that lay behind it. He was originally given just six months to live, and you've got to be one tough motherfucker to put off death for years on end like he has knowing that shit will kill you eventually anyway.

Ever since then I've done my best to emulate his example, which means occasionally allowing yourself to get pissed off about your situation even though that might make others uncomfortable. Once when I was on chemo I felt strong enough to go out running. I won't say I made great time, but I lasted a full 30 minutes on what was a gorgeous late spring afternoon. As I slowed to a walk, I looked down at my abdomen and blurted out, "fuck you!" at the tumor as if it was a living, breathing opponent and not just a lump of senseless but deadly flesh. Hey, get busy living or get busy dying. I think I heard that said in a movie once.

Anyway, not long ago another friend of my wife who is a cancer survivor was talking with her about a mutual friend of theirs who had "overcome" the same form of the disease only to get that bad CT scan result that every one of us in the club dreads--the bastard is back. My wife's friend confessed to her that, given the overall percentage chance that she will one day find herself in the same position, whenever she hears of some other "survivor" experiencing recurrence she just can't avoid thinking, no matter how terrible it sounds, that if nothing else it increases her own chances of survival ever so slightly.

My surgery, which I am still in the process of recovering from, involved a lengthy hospital stay during which my wife and I got to know some other patients who had the same procedure around the same time I did. There was one guy in particular--a few years older than me--who coincidentally is a friend of one of my in-laws. We chatted a number of times in those early days, comparing notes on how shitty we felt and whatnot. As it turned out the two of us were the only ones of six pancreatic cancer patients on our floor whose surgery was a complete "success," meaning that afterwards lab tests determined that there was no cancer detected either in the margins around our tumors or in our lymph nodes.

Two had their tumors removed but got bad test results, meaning they had more chemotherapy and/or radiation treatments to look forward to. The other two were even more unlucky in that their tumors could not be removed, though they still faced the same horrible recovery we did. One of those two was even told that the surgery revealed that his tumor had metastasized (insidiously, the doctors can't actually see everything going on inside you through a CT scan), and sadly he passed away a mere two months later. My wife attended his funeral. I wanted to accompany her, but that turned out to be one of the bad days.

So you can imagine how lucky I felt even as my body weight plummeted 40 pounds in the aftermath, and the pain and discomfort reached levels I hadn't yet experienced in over a year's worth of truly wretched treatments. Certainly, I expected that my fellow "survivor" would feel the same way. Surprisingly, he didn't.

Though he lives in another part of the country, I was able to keep in touch through a journal he keeps on one of those websites for people with serious illnesses. In the months that followed the surgery, I noted in his posts an unexpected negativity that seemed to go beyond being down about how terrible the recovery process was. In one of his posts, he described how after being diagnosed he had shut down his business and wasn't sure if he'd have the strength to start it up again. I'm not sure if others who read his journal could sense it by reading between the lines, but it seemed to me that he had mentally prepared himself to die. Perhaps he'd been subconsciously glad to be leaving the rat race that is modern life in America, I really don't know, but apparently being given a new lease on life wasn't really a blessing for him.

Flash forward to a month ago. As it so happened my friend in misery and I had our first post operative CT scans just a few days apart. I'd be lying if I said I wasn't sweating it out, but for me it came up clean--meaning as far as the doctors can tell I'm currently cancer free (which is only good news for a few months until the next scan). Unfortunately, he was not so lucky. Not only had his cancer returned, but it had actually metastasized. He was pretty frank when he posted the news, even saying how unlikely it is that he will be alive at this time next year.

Incredible as it may seem, however, his postings since then have taken on a more positive tone--or at least one far less rooted in misery. It's almost as if he is now welcoming the outcome he had expected all along. Could it just be that he can't bear the thought of forever living with a loaded gun pointed at his head never knowing when it will go off? I really don't know, and as an outside observer and only a casual acquaintance at that I wouldn't begin to presume to know what is really going on in his mind. But as a fellow traveller on this dark, dark road of ours I can understand why maybe he would actually welcome the worst, just as I can empathize with Robin Williams and understand why, facing Parkinson's at age 63, he did what he did.

So I guess it then begs the question, am I glad it was him and not me? As I sit here typing, anonymously pouring out thoughts I could never say aloud to my friends and family, still in constant pain from chemo-induced peripheral nerve damage, popping more pills each day than I used to average in a year just to keep things tolerable, I can't honestly say for sure. Check back with me in about five years--which is how long it usually takes until the doctors will declare you "cancer free" (and even that is no guarantee). Maybe then I'll have an answer to an unspoken and guilt-ridden question that used to be a no-brainer.


Bonus: No, Walt, CANCER is The Danger