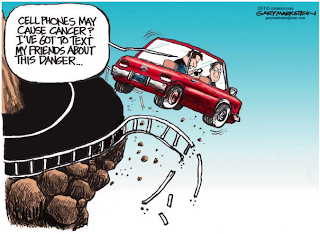 You know, life is funny sometimes--yeah, funny the same way a two by four upside the head is funny. I'm sure the real Bill Hicks would have found plenty of gallows humor upon learning that nearly two decades after his death a blogger who chose to adopt his identity online managed to contract pancreatic cancer, which is the same goddam fucking awful ailment that so unkindly robbed the world of his very much needed presence at the tender young age of 32. In retrospect, I should have chosen George Burns as my avatar--that way I could have smoked cigars and fucked young starlets until I was 100 years old (though it was too bad for George that he kicked off long before Viagra was developed).

Yep--the universe has a real sense of humor sending that particular malady to plague the life of a guy in his 40s who (unlike the real Bill) never smoked, exercised a lot and drank only in moderation. Oh, and did I mention that there's virtually no history of cancer in my family? Yeah, there's that, too.

But I'm not bitter.

No really, I'm not. The fact is, despite being told 19 months ago that my life expectancy was less than one year, not only am I still here but I am one of the VERY lucky few who has managed to "beat" pancreatic cancer. I place "beat" in quotations because despite all the happy cancer ad horseshit you hear from various cancer charities, no one ever REALLY beats cancer. For while it is true that the longer you go after being successfully treated for the disease the better your long term chances of survival, the fact is that you are always living under that Sword of Damocles--one bad CT Scan away from being right back in that horrible chemotherapy chair knowing that your chances the SECOND go-around are that much worse than the first.

So that's what's been going on in my life during my long absence from blogging. I have a lot more thoughts about cancer, the medical establishment and all the BS cancer patients have to put up with even if they are fortunate enough as I was to have good health insurance--but that will be for later. Tomorrow, I plan to come back here with an honest to your favorite deity old fashioned TDS post. I've heard whispers that a whole lot of bad shit has gone down in the world since the last time I rhetorically kicked that pathetic windbag in the White House right in the teeth and I have a few things I'd like to get off my chest.

In the meantime, please enjoy this HIGHLY inappropriate-under-the-circumstances ditty from Joe Jackson. "There's no cure, there's no answer" indeed.