It is What it IS 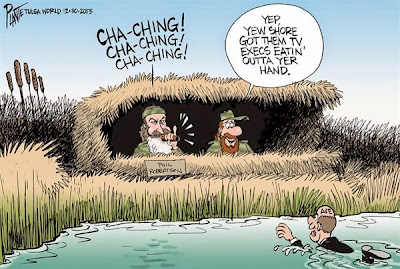 Okay, I have REALLY had it with all these ragged looking, religious extremist back country hicks demanding that everyone who refuses to conform and worship God EXACTLY the same way they do be exterminated like cockroaches. These people are CLEARLY a threat to our American way of life, and President Hopey-Changey needs to stop being such a spineless, spluttering little pansy-boy and sic our ginormous military on them post-haste.

Oh, wait a minute, did you think I was referring to ISIS (or ISIL or IS or Whatever-the-fuck-it-IS?)? No silly, I was talking about Phil Robertson and his merry band of drooling, ZZ Top-wannabe troglodytes.

It's at about this point in the program that the Internet's vast legion of armchair warriors gets itself worked up into a rabid froth and begins firing off bile laden comments about how it is the Mooslim fundamentalist whack jobs from ISIS who are running around lopping off heads of anyone they deem an infidel and posting videos of the executions on You Tube for your entertainment. All poor ol' Phil was doing in that Hannity interview, they would argue, was exercising his God-given First Amendment right of freedom of expression.

Fair point. Okay, for the moment I'll take back my facetious call for military action against the Duck Dynasty. After all, there is a BIG difference between committing hideous acts of violence and merely spouting virulently violent rhetoric on national teevee, right?

Well, maybe not that much.

Let's examine for just a moment who Phil Robertson is. Beyond being a self-professed fundamentalist Christian, Robertson has a net worth of around $15 million that is the result of both his hunting apparel business and his reality television show. In other words, he is despite his apparent fanaticism one of the LEAST likely guys in the world to go out beheading reporters and risking having a predator drone dropped on his rich-ass head.

On the other side of this equation are the mostly anonymous ISIS fighters, who these past few months have been rolling up Iraqi and Syrian controlled enclaves even faster than they have the heads of kidnapped American reporters. But think for just a moment about who the ISIS guys actually are: mostly dirt poor young Sunni males who until recently were living under the oppressive Assad and Maliki regimes and whose life choices came down to either whiling away their days tending goats under a blistering hot desert sun for a few dinars a day, or joining up with the local militia boys and being handed AK-47s to go tear-assing around the countryside blowing away soldiers of those very same regimes that had had their boot heels so firmly placed upon their collective necks.

So which choice do YOU think they were gonna make? If you said "goat herder," you fail and clearly need to be sent back to retake Basic Fundamentals of Human Nature 101 all over again. It's a well worn cliche to say that when people got nothing, they got nothing to lose, and few people on this here old Earth have less to lose right now than your average Muslim living in those unfortunate Middle East and South Asian states that have been ripped apart by more than a decade of unbridled American and NATO militarism--to say nothing of a century's worth of exploitative Western imperialism.

But hey, let's flip this narrative over for a minute and imagine that it was Phil Robertson and his clan who had had the misfortune of being born Sunni down in old Mosul. And let's take it a step further and imagine that it was instead a handful of ISIS fighters who had been lucky enough to be born Christian on the Bayou, where the humidity may be high but one at LEAST generally has recourse to the rule of law, especially if one has managed to build a small fortune and can afford to sue rather than shoot their enemies. NOW who do you suppose is going to be rolling heads through the desert sands like zombie bowling balls versus who'll be raking in millions from their duck calls, parading around like circus freaks on their stupid reality teevee show and for some reason being asked to go on a national "news" network so some idiotic airhead can ask them to opine about world events?

It is about at this point in the essay that I imagine at least a few of you are thinking, "hey, Bill, who really gives a flying FUCK what Phil Robertson has to say?" Well, if these were "normal" times in America I'd agree 100%. But as I've pointed out so often on this blog, these interesting times of ours are anything but normal. America has for years now been skating along the edge of the economic precipice just waiting for SOMETHING to shove the country over into the abyss of at least partial economic collapse. And when the day finally does come in which either that happens, or enough Americans see their livelihoods ripped away from them that the country reaches political critical mass, what do you suppose the millions of heavily armed Americans who heard what Brother Phil said and thought "you're God damned right!" are gonna do?

America as a political entity is already beginning to splinter, just as James Howard Kunstler predicted it would in The Long Emergency, as evidenced from such events as the Ferguson riots and the various secession movements around the country advocating separation from certain states or even the U.S. itself. When it starts to actually break apart things are going to get ugly in a hurry for minorities, gays and even women, and many Americans are going to wake up and suddenly find themselves living in a dystopian world little better than the one those unfortunate civilians in the ISIS occupied territories are currently residing in.

I deplore Phil Robertson's comments for their obvious blind bigotry, hatred and sheer fucking ignorance. But what's worse is the fact that his hate filled words were not universally condemned from the moment he closed his mouth after uttering them. Sadly, what they represent is yet another weather vane pointing to which way the wind is currently blowing in our very broken body politic.

Ironically, by funding the Syrian rebels against Assad our government stupidly created the conditions that has allowed ISIS to flourish, while at the same time its domestic policies of continually rewarding banksters and Wall Street while fucking the middle and working classes is slowly creating the conditions that may well someday allow intolerant, violent, ISIS-like extremist groups to flourish right here in the homeland.