A Half Million Dollars Could Save Your Life 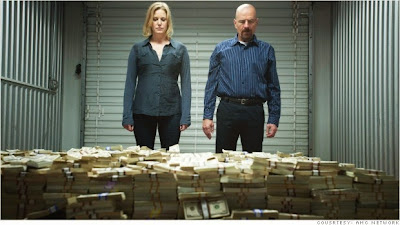 One thing I've been quite thankful for during my battle with cancer is that I at least have good health insurance and didn't face the additional awful stress of worrying about being financially ruined by the disease. In fact, given how close run this thing was (and still is, frankly) that would likely have been the literal death of me. Though I've lost track of the precise amount, to date the total cost of my care the past two years has easily topped $500,000. One shot alone that accompanied each of my twelve chemotherapy treatments and is designed to help regenerate white blood cells cost $10,000 apiece (yeah, HOL-LEE SHIT is exactly what I thought, too). How many people do you know that have that kind of cash sitting around in their rainy day fund? Yeah, I don't know many either.

It happens so often these days that you hear of someone who has cancer for whom their friends and family have put together a big charity drive that we don't even think anymore about how stressful it must be for the patient. One of the best gags on the otherwise darkly brilliant teevee show, Breaking Bad, even has Walt laundering his drug money through a charitable website set up by his son.

Since I do have good health insurance, I make a point whenever I am discussing my disease with someone of mentioning this cost and how lucky I've been not to have been bankrupted by my ailment. It's my little way of trying to raise awareness of our totally broken health care system without being overbearing about it or starting an argument (though I do notice that as a cancer patient I get far more deference when raising controversial topics than I used to get before I got sick). Sadly, it seems to go way over most people's heads, though I did get one conservative coworker of mine to admit that MAYBE everyone ought to at least be entitled to catastrophic coverage (though who would determine exactly what constitutes a "catastrophic" condition he didn't say).

Had I not had the insurance, I would have faced two stark choices when I was diagnosed: pay up or die. And considering how unlikely my survival was at the start (pancreatic cancer has a five-year survival rate of less than 10%), I might well have chosen the latter to spare my wife from losing the entire nest egg we have built up over the last 20 years. Had we had children, the choices would have been even bleaker--them losing their father versus the loss of any chance that their parents could have helped provide for their future. Strictly on an actuarial basis, treating my cancer made no sense whatsoever.

So why is it exactly that real national health care was a non-starter from the get-go, and how exactly did we end up with an Obamacare abomination that has done little to alleviate the problem? Because, quite simply, there is virtually no empathy left in American politics these days. The vast majority of the people who vote in this country have divided themselves up into two tribes: one who couldn't give a shit about the less fortunate, and one who turns a total blind eye to any injustice just so long as it is being perpetrated by politicians who have a little "D" after their names when they appear on teevee.

But there is one little way that I take solace in all of this. Up until two years ago, I used to joke that being in such good health my whole adult life meant that my health insurance carrier was making out like a bandit on me. As it turned out, however, the joke was on them.


Bonus: "Every life comes with a death sentence"