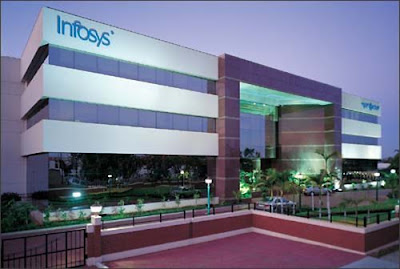 It's bad enough that American jobs are being shipped overseas because of globalization. It's even worse when cheap foreign labor is being imported into the United States with the complicity of the federal government. Here is CBS News with the details:


We've all had this happen: you call an American company's 800 number for help, and end up talking to someone in a foreign country. It's called outsourcing. American firms do it because foreign labor can be cheaper.

But now, one company is being accused of bringing those lower-paid workers to the U.S. illegally and that may be costing Americans jobs.

The allegations are the subject of a federal probe and CBS News has been investigating this story for months. The allegations have been made against a giant Indian information technology firm called Infosys. The charges are coming from inside the company, from an employee who has never spoken publicly before.

Jay Palmer is a principal consultant at the company called Infosys. He is also the whistleblower whose charges sparked the federal investigation. Palmer says Infosys, the global high-tech giant, engaged in a systematic practice of visa fraud, a charge the company denies.

Palmer said the first thing to catch his attention was an employee that had been in the U.S. from India several times before.

"He came up to me and he was literally in tears," Palmer said. "He told me he was over here illegally and he didn't wanna be here. He was worried that he would get caught."

Palmer says he began digging into how and why Infosys seemed to be bringing in large numbers of workers from its corporate headquarters in Bangalore, India, into the U.S.

Palmer says at first, most came over on H-1B visas. These visas are for people with specialized talents or a level of technical ability that can't be found among American workers.

When asked if all the people had some special expertise that couldn't be found in the U.S., Palmer said, "Absolutely not. Not even close. Many of them is what we call freshers. People that would just come over, whoever they could get to come over. Whoever got accepted for a visa."

Many of the people brought in, in fact, didn't know what they were doing at all, Palmer said. "There was not a project or program that I was involved in that we did not remove somebody because they had no knowledge of what they were doing," he said.

So then what's the motive to bring them in? You could hire an American who is trained in that particular discipline and do better.

Palmer says the Indian workers on his team were paid substantially less than an American would have made in the same job.

When the U.S. State Department began to limit the number of H-1B visas, Palmer says Infosys began using another type of visa, the B-1. The B-1 is meant for employees who are traveling to consult with associates, attend training or a convention. But Palmer says the employees were brought in not for meetings, but for full time jobs.

So why would Infosys do this? And what advantage did it give them in the marketplace?

Palmer said, "They could outbid everybody or underbid everybody on every contract (because they were paying less.) For example...if I'm gonna pay you $15,000 a year why would I pay an American or a legal worker $65,000 a year? It makes no - it's just economics."

And Palmer says the B-1 workers never paid U.S. taxes because they received their salaries from India.

"They're basically a lot of times being paid on a cash card or a debit card where money was put in their account," Palmer said. "And the fact is, is they're just taking that money out and they're never paying U.S. taxes."

Infosys may not be a household name to many Americans, but in the technology business, the company is a powerhouse. It is one of the biggest consulting firms in the world with more than $6 billion in revenues last year alone, and 145,000 employees in 32 countries. But the bulk of its business comes from the U.S., re-engineering the computer systems of some of the biggest names in corporate America.

Federal officials say Infosys employees have 6,000 B-1 visas good for 10 years. Palmer says if just half of those employees were working on U.S. soil that would earn the company more than $150 million a year more than if they paid Americans the prevailing wage.

Infosys declined CBS News' repeated requests for an on-camera interview with a company executive or with chief executive officer and chairman S.D. Shibulal. But the company's chief financial officer, V. Balakrishnan, has denied the charges on Indian television, saying, "I think we are very clear that we have not violated any of the rules. We believe we have a strong case."

Infosys did give CBS News a statement saying, in part, "Any allegation or assertion that there is or was a corporate practice of evading the law in conjunction with the B-1 visa program is simply not accurate, and we will vigorously defend the company against any false allegation to that effect."

But one of Palmer's most serious allegations is that top company executives not only knew of the alleged fraud, but wanted to expand on it to increase profits. Palmer says during a 2010 meeting at Infosys' corporate headquarters in Bangalore the practice was discussed with a group of executives, including a senior vice president.

Palmer told CBS News, "There was some conversations about how to increase the share price, which is - in America is the stock price. So it's really about getting people over no matter what the cost or whatever. And you know, I think that's the first time I heard the term, you know, 'Americans are stupid.'"

If Palmer is telling the truth here, and I am inclined to believe that he is because as a whistleblower against a multi-national corporation he is the one who has placed his ass on the line, that assessment is absolutely correct, Americans ARE stupid. Forget for a moment whether or not Infosys is committing visa fraud. If they are, the company should obviously be vigorously prosecuted. What's even more outrageous is that at a time of record high unemployment, the U.S. government agreed to grant 6,000 visas for Infosys employees to come to work in the U.S. in the first place.

Does anyone still need to be shown a more glaring example of how the federal government now represents the interests of multinational corporations over those of the American people? There is NO justification for the U.S. to be importing cheap foreign labor, even if it was being done legally, when so many people are struggling to find work. It is all being done in the name of globalization, which was always a scam to enrich the elites at the expense of everybody else. We can only hope that these outrageous charges will be thoroughly investigated and the vigorously prosecuted if found to be accurate. But I'm not holding my breath on that last point.