"I'm Getting Really Tired of the Che Guevara Bullshit" 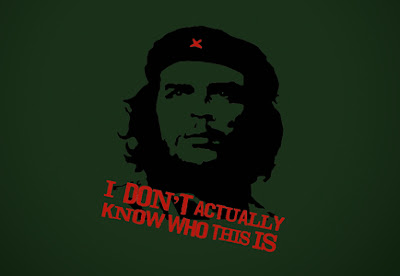 I'm interrupting the intended second part of my last post because I had a conversation the other day that's been bugging me ever since and I just had to write something about it (hey, it's my blog, I can DO that, right?). I promise I'll get back to it.

Anyway, I was chatting with an old high school chum who lives in another part of the country when he brought up some problems his teenage son has been having in school. He attributed much of the trouble to the boy's teacher, whom I take it he does not see eye to eye with politically because he actually said about the woman, "I'm getting really tired of the Che Guevara bullshit."

At first I wasn't sure I'd heard him correctly, since I cannot ever recall another occasion in which the late Cuban revolutionary's name has popped up in casual conversation. When it finally sunk in I was horrified, not because of what it indicated about my friend's politics--he did a 20-year stint in the navy, after all--but because I realized that he actually doesn't have a fucking clue what Che Guevara really stood for. He was just mindlessly spewing stupid right wing rhetoric.

How do I know this? Well, my friend lives in a mostly lily white exurban area where, I would be willing to bet a considerable sum, no one who actually preaches the teachings of Che Guevara in a public high school class would remained gainfully employed for very long. In fact, if the poor woman is like most public high school teachers these days she is probably too busy desperately searching for some way to elevate the class's standardized test scores so the school doesn't lose government funding to even think about trying to turn her students into a radical bunch of Commies.

Dwelling on the subject a bit more after the fact, it struck me that it also goes without saying that the hippie nitwits who go around sporting their designer Che Guevara t-shirts and jackets ALSO likely have no real understanding of what the man stood for. They just know it's a cool way to piss off reactionary old farts like my friend.

So there's the American political system in a nutshell--conservatives who are unable to think for themselves versus liberals who think nothing of turning a anti-capitalist revolutionary into a corporate commodity. No wonder we're fucked.


Bonus: "Standing there with her long brown hair...in a Che Guevara t-shirt"