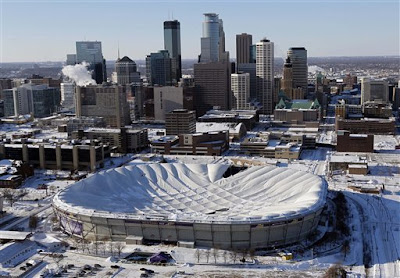 image: the Metrodome roof does its best imitation of the chances that the Vikings will get a new, publicly funded stadium


Back on October 16th, I wrote about how officials in the state of Minnesota seemed determined to ram through a public funding deal for a new Minnesota Vikings football stadium over the objections of a substantial portion of the electorate. Well, the chances of that happening just became slimmer, as reported on Thursday:


On the eve of the release of the state's economic forecast, there were some nervous lawmakers eager to get the new numbers. Most were expecting a budget deficit in the $750 million range.

"This is one of the more uncertain times I've done a forecast," MN State Economist Tom Stinson says. He's been issuing these forecasts since 1987. He says the hard copy will be around 100 pages.

"The rumors are at this point, is the state of Minnesota will face another billion dollars in the hole when the fiscal forecast comes out on Thursday," Hamline University Political Expert David Schultz said.

Ouch, THAT'S gonna leave a mark. Minnesota, of course, experienced a shutdown of its state government this past summer over the budget problems it was already experiencing.

Fortunately, the biggest loser in all of this is apparently going to be the Vikings:


Professor Schultz says the proponents of a Vikings Stadium funded partially with public money were hoping for a deal ahead of this dismal forecast. "How easy is it going to be to say okay, we're going to rob a billion dollars from K through 12, but we're going to give Zygi Wilf a half a billion dollars? Politically, you can't do that," he explained.

Certainly not while the Occupy protests are in full force all around the country. As I said in my previous post on this subject, if Zygi Wilf (WTF kinda name is THAT for a human being, anyway?) wants a new super expensive playground for his millionaire athletes and corporate fat cat buddies, let the fucker pay for it out of his own damn pocket.

"Oh, but he might then move the team to LA!" the stadium funding proponents shriek. Good, let him. California is even more broke than Minnesota and the Vikings fucking suck anyway. They haven't appeared in a Superbowl since back when Brett Favre was still raising his hand to ask the teacher's permission to go take a number two.

I know I'm a cold-hearted, cynical bastard, but hearing that the Vikings may not get their ransom for a new stadium from the taxpayers after all put me in a much better mood to watch the games today. Are you ready for some football?


Bonus: Just to show that there is no offense intended to the good citizens of the Twin Cities, here are local heroes, The Hold Steady, with one of their most kick ass anthems