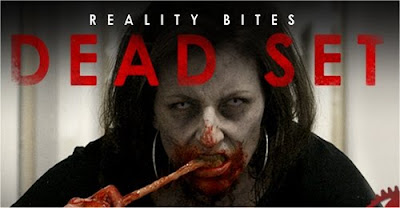 So in that spirit, I thought I would link to the full video version of Dead Set, which for my money is the best zombie movie ever made. It first appeared as a five-part teevee show on British television, but the whole thing sans commercials is only a bit under two-and-a-half hours long. Dead Set ups the ante on Romero's Dawn of the Dead by placing its initial outbreak survivors on the set of the British reality show, Big Brother. The acting, writing, production values and the (ahem) bitingly dark humor are the best I've ever seen in the genre, and that includes its American teevee counterpart, The Walking Dead.