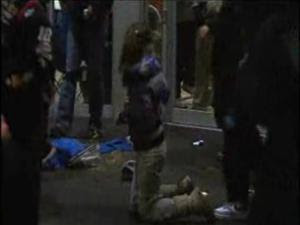 As it turned out, Black Friday was not the most out-of-control display of mindless consumerism in America this year. That honor now goes to today, Black Friday Redux, and the accompanying violence and senseless behavior over the latest release of sneakers endorsed by a washed up has-been who hasn't played a game in nearly a decade. Here is BBC with the details:


There was disorder from California to Georgia as shoppers vied to buy a retro version of a classic Air Jordan model.

The ugly scenes recalled the violence that broke out in the early 1990s on streets across America as the shoes became popular targets for thieves.

In the early hours of Friday, police used pepper spray on about 20 customers who started fighting at a mall in suburban Seattle, Washington state, as they waited in line to buy the black-and-white Air Jordan 11 Retro Concords.
Gunfire

One man was arrested for allegedly punching a police officer.

"He did not get his shoes. He went to jail," Officer Mike Murphy said.

He added: "It was not a nice, orderly group of shoppers. There were a lot of hostile and disorderly people."

At least four people were arrested after customers broke down a door at a store selling the shoes in Lithonia, Georgia

There was an attempted robbery on a victim who was mistakenly believed to have just bought the shoes in Stockton, California

About 100 shoppers forced their way into a shopping centre in Taylor, Michigan
A gunshot rang out as shoppers queued in Richmond, California, although no injures were reported

How many of these people do you suppose were also putting themselves even deeper in debt just to buy a pair of these overpriced pieces of shit? What a sad, sick culture we live in. Frankly, when it finally collapses I won't miss it one damn bit.
Posted by Bill Hicks at 8:24 PM