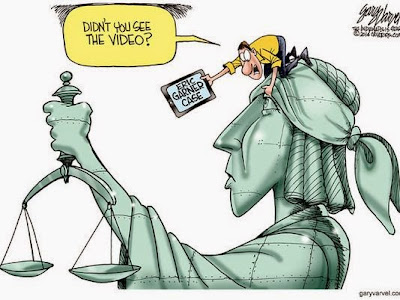 So the NYPD is "turning its back" on Mayor Bill de Blasio for having the audacity to tell his children what every minority parent in the New York City and probably all across the country ought to be telling their children--be very careful in your interactions with the police. And as to those many NYPD officers who literally turned their backs to the mayor when he was doing what a good mayor should--honoring one of their own killed while doing what police are SUPPOSED to be doing, namely protecting the public rather than choking the shit out of them--let me offer up a hearty, "fuck you." As the elected mayor of New York City, de Blasio has a responsibility to ALL the citizens of New York, not just your immature and insular asses. And yes, that also means calling out the thugs among you--and you all know damn well who they are even if each of you are too chickenshit to do the right thing yourselves.

If the NYPD was trying to send a message, this writer heard it loud and clear. The "Turn Our Backs" fiasco with de Blasio made me think of someone else so many of you sanctimonious fuckers in blue, past and present, turned your backs on. His name was Frank Serpico, and he's a true hero who has been living with the consequences of your lack of support for over 40 years now.

I'll admit I'd mostly forgotten about Serpico until just a few months ago when he wrote an essay for Politico entitled, "The Police Are Still Out of Control." In it, he included this chilling passage about the NYPD:


Forty-odd years on, my story probably seems like ancient history to most people, layered over with Hollywood legend. For me it’s not, since at the age of 78 I’m still deaf in one ear and I walk with a limp and I carry fragments of the bullet near my brain. I am also, all these years later, still persona non grata in the NYPD. Never mind that, thanks to Sidney Lumet’s direction and Al Pacino’s brilliant acting, “Serpico” ranks No. 40 on the American Film Institute’s list of all-time movie heroes, or that as I travel around the country and the world, police officers often tell me they were inspired to join the force after seeing the movie at an early age.

In the NYPD that means little next to my 40-year-old heresy, as they see it. I still get hate mail from active and retired police officers. A couple of years ago after the death of David Durk — the police officer who was one of my few allies inside the department in my efforts to expose graft — the Internet message board “NYPD Rant” featured some choice messages directed at me. “Join your mentor, Rat scum!” said one. An ex-con recently related to me that a precinct captain had once said to him, “If it wasn’t for that fuckin’ Serpico, I coulda been a millionaire today.” My informer went on to say, “Frank, you don’t seem to understand, they had a well-oiled money making machine going and you came along and threw a handful of sand in the gears.”

In 1971 I was awarded the Medal of Honor, the NYPD’s highest award for bravery in action, but it wasn’t for taking on an army of corrupt cops. It was most likely due to the insistence of Police Chief Sid Cooper, a rare good guy who was well aware of the murky side of the NYPD that I’d try to expose. But they handed the medal to me like an afterthought, like tossing me a pack of cigarettes. After all this time, I’ve never been given a proper certificate with my medal. And although living Medal of Honor winners are typically invited to yearly award ceremonies, I’ve only been invited once — and it was by Bernard Kerick, who ironically was the only NYPD commissioner to later serve time in prison. A few years ago, after the New York Police Museum refused my guns and other memorabilia, I loaned them to the Italian-American museum right down street from police headquarters, and they invited me to their annual dinner. I didn’t know it was planned, but the chief of police from Rome, Italy, was there, and he gave me a plaque. The New York City police officers who were there wouldn’t even look at me.

Four decades after Serpico took a bullet to the face because of some cops who were no better than the thugs they were supposedly out to arrest and many in the NYPD, even some I gather who weren't even born yet on the day he was shot, STILL consider what he did to be worse than what he tried to stop.

It's actually a shame that the recent spate of highly publicized police abuse cases have become wrapped up in poisonous racial politics, because ultimately such divides provide the type of backlash political cover that makes it easy for institutional inertia against police reform to continue. Towards the end of the article Frank Serpico, bless him, tries to remain optimistic that his ongoing efforts to combat police abuse will inevitably make a difference. But the sad fact is that until and unless older, well off white people in this country begin to routinely experience what happened to Eric Garner, police will continue carry an effective license to kill. And I say that as one of those who is so insulated--the worst thing any cop ever did to me was write me a speeding ticket.

I rarely feel any sympathy for any politician, but I don't envy de Blasio going forward after having stirred up this hornet's nest. If he gets strung up politically or retreats back into his shell, he'll be the negative example that no other mayor, governor or even president will want to emulate. For every Frank Serpico there are a dozen Daniel Pantaleos, and plenty of others who instinctively turn their backs on the former while covering up for and supporting the latter.


Bonus: "You fire without a warning...without a fucking brain in your head?"