The Cynical Politics Behind the Release of the CIA Torture Report 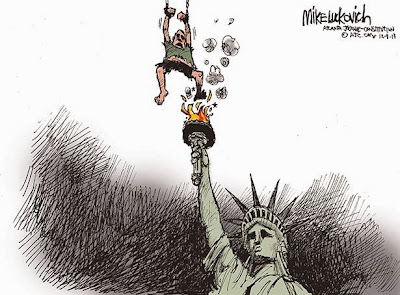 I want to begin this post by assuring my readers (both of you, hi!) that I am glad the CIA torture report, even in its heavily redacted form, was allowed to be released before the new Senate Republican majority hit town and sank the the whole thing to the deepest recesses of the Mariana Trench. ANY report being released that speaks at least some of the truth about what the CIA was up to doing during the Bush years is at least better than no report at all.

But rather than express my outrage over what the report says, as is being done in many other quarters, I'd like to instead focus on the individual who is most responsible for getting it out the door before it slammed shut: namely the senior U.S. Senator from California, and lame duck chairman of the Select Committee on Intelligence, Dianne Feinstein. Who is Dianne Feinstein anyway? Well, she is currently the oldest and one of the wealthiest members of the Senate with a net worth by some reports nearly in the nine figures. She is a Democrat and supposed "liberal" who voted for the Iraq War and the Patriot Act and also for the hideous FISA law removing judicial oversight of the executive programs that spy on U.S. citizens. Not only that, her husband is an investment banker who has made countless millions from defense war contracts.

In other words, she seems like just the kind of fake liberal sellout Democrat who might have chosen delay the report's issuance until Mitch McConnell's new Intelligence Chairman could bury it forever. So why did she do it? Was it the remorseful act by an aging old woman who as mortality approaches is feeling a pang of conscience after selling out every young Californian idealist who ever believed in her? Excuse me if I say, not bloody likely. Feinstein strikes me as another Madeline "half a million dead Iraqi children was worth it" Albright type of crusty old stain upon the human race--in other words not the kind who has any conscience at all.

Nope, my personal belief, having no direct knowledge of the situation, is that this was a way for a Democrat whose party just took a major electoral shellacking and is fast on its way to political irrelevancy to try once again to demonstrate to the idiots voters who support her party that there really is a difference between her tribe and the red one. We Democrats may be "Republican lite" on most issues, Feinstein is saying, but at least we are willing to issue a damning report that states what everybody already knew. And for that it's working beautifully. Right on cue, conservative "news" outlets like Fox and the Wall Street Journal immediately fell in line, blasting the report on a strictly partisan basis. Meanwhile, some of the right's more unhinged troglodytes started spewing the kind of fascist rhetoric guaranteed to get (male and female) liberals' panties into a bunch and frothing at the mouth to--make sure they vote Hillary in 2016. That'll learn 'em.

This whole spectacle is, of course, sound and fury signifying nothing, as here in America at least the report will be largely forgotten about by the general public before the new year even rings in. And if overseas outrage should generate another international terrorist attack or two, all the better to keep that War on Terror gravy train a-flowing for war profiteers like Ms. Feinsein's hubby.

As for the CIA itself, the report will change nothing. Obama had already curtailed the agency's worst GWOT abuses (well after the Inside-the-Beltway consensus had already decided torture was counterproductive), so the agency will claim that there is nothing that needs changing. The whole debacle will certainly be another major public relations black eye for Langley, but really, after decades of abuses and spectacular failures and fuck ups, could the image of America's top spy agency really get any worse?


Bonus: "I don't really give a good fuck what you know or don't know--but I'm gonna torture you anyway"