Soon it Might Not Just Be "Open Season" on Black Teenagers 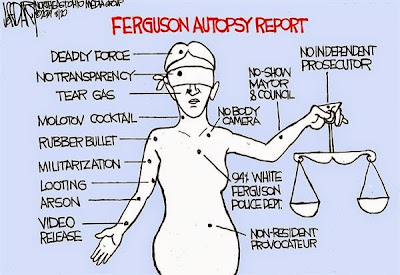 The reaction in many quarters to the Michael Brown shooting and verdict have been quite interesting. It was disappointing for example to see that James Howard Kunstler, whose 2005 book The Long Emergency served as my wake up call for the issues of Peak Oil and resource depletion, has used his recent blog posts to expose himself as a typical old white latent racist of the "get those kids off my lawn" variety. Being Jewish, Kunstler is no doubt familiar with the old Holocaust anecdote that begins with "First they came for the Jews, but not being Jewish I did not speak up," and ends with the narrator himself being hauled away by the Gestapo with no one left to speak up for him. But Jim seems completely oblivious of the fact that by failing to speak up for the young black men being executed on the streets of America by unaccountable cops there may well come a day when it will be "open season" on radical authors who repeatedly agitate against the government and Wall Street--even if they happen to be grumpy old white men.

Surprisingly, one writer who has been pretty sensible about all this is Market Ticker's Karl Denninger, who pointed out how Darren Wilson was allowed to lie to the Grand Jury even as the local prosecutor deliberately steered that same jury to a no bill:


Nobody, with the exception of this site and, believe it or not, one particular thread on Daily Kos, have examined the actual issue -- the fact that the physical evidence did not support the police officer's narrative -- not originally, not as the case developed and not in the Grand Jury testimony.

Further, there is plenty of hard, documentary evidence of intentionally false instructions being given to the Grand Jury -- specifically, the standard for the use of deadly force by officers was presented to them as the pre-Supreme Court decision in 1985 (Tennessee .v. Garner) on shooting fleeing felons. The Grand Jury was instructed that this was permissible when in fact this has not been for 30 years. That's not an accident, it is intentional and willful misconduct on the part of the authorities. Were you or I to give an intentionally false presentation to a Grand Jury we'd find ourselves in prison and with good cause. The Prosecutor will not face that same punishment, yet it was a direct and proximate cause of the no-bill decision.

But now we have the NYC case in which there was a refusal to indict as well -- and this is even more outrageous as the conduct in question, a police choke-hold that was found by the medical examiner to be the cause of death as he ruled it a homicide is a banned practice in most police departments -- including in NYC.

What has been most revealing and particularly disheartening about these cases going all the way back to the Trayvon Martin travesty is the reflexive rallying of support for the shooters. It has been reported that over $500,000 has been raised for cold blooded killer Wilson (and yes, given that Wilson said in an interview he'd do it all over again the exact same way, I have no hesitation in labeling him a sociopath), and a similar online fundraising effort was undertaken on behalf of Zimmerman. Worse yet was the rash of police officers around the country publicly posting or proclaiming "I am Darren Wilson," which ought to make any conscientious citizen of any race, creed or color's blood run cold.

What you see here is an America that is rapidly regressing in area where true progress had ever so recently been made. After repeated public disclosures of police corruption and abuse that were published and broadcast starting in the late 1960s and early 1970s there was a nationwide effort to clean up and improve the profession. College degrees became far more common for officers as Criminal Justice became a sought after university major. "Civilian oversight" became a common catch phrase that was begrudgingly welcomed by the leadership of departments that knew they needed to get rid of at least the worst of their bad apples and shore up their public image.

Unfortunately, the aftermath of 9/11 had the same kind of corrosive effect on law enforcement that is has had in so many other aspects of American life. The images of NYPD officers rushing into to the towers and losing their lives to save their fellow citizens turned them into heroes--in much the same way as were the soldiers and Marines going off to fight in Afghanistan and Iraq to "avenge" those who died in the towers. Unfortunately, the hero worship of police officers has persisted, making them virtually immune from criticism in many circles, particularly among those who believe "law and order" is far more important than numerous Constitutional amendments--save, of course, the 2nd.

Dovetailing the 9/11 hero halos placed upon the police, was the militarization of police forces as federal homeland security money was generously heaped upon departments so they could purchase the excess military grade hardware being churned out by American defense war contractors. Historically, one thing that has separated America from being like the tin pot dictatorships and banana republics around the world is that we don't send tanks and regular army units into the streets to restore order. But with our police now driving APVs, outfitted like the stormtroopers on the Death Star and carrying high power weaponry, the distinction is rapidly fading.

Though petty police corruption such as taking small bribes to ignore misdemeanors may not be as prevalent today as it was a couple of generations ago, with their repeated displays of wanton violence against citizens police departments are more out control today than they ever have been. Worse yet is when the asshole prosecutors, whose fucking JOB it is to protect the public from criminals, even and ESPECIALLY those criminals who wear the badge, through their actions sanction and condone executions of unarmed citizens, America steps that much closer to becoming a police state. Chickenshit Obama has the option of ordering the Department of Justice to conduct federal civil rights investigations in these cases, as Daddy Bush did after the initial Rodney King verdicts. His failure to do so is inexcusable, though at this point I am beginning to wonder if the U.S. has become so polarized that it might be impossible to get even a federal jury to convict a cop of murder these days.

I'd like to close this particularly grim post by saying that these events, and the public's reaction to them, should finally dispel any notion by liberals or progressives that the election of Barak Obama showed that America had finally moved past its long history of racism. The disgraceful overt cheering on of sociopathic murdering assholes George Zimmerman and Darren Wilson and the repellent attempts to smear the character of their innocent victims demonstrates that racial hatred is not only alive and well among a substantial portion of the population, but is deepening and hardening is ways that portend some potentially very scary future scenarios as America continues to slowly sink into the economic abyss.

Next time it might not be a black teenager impudently walking in the street instead of on the sidewalk who gets gunned down for defying authority, it might be a grouchy old Peak Oil writer who dares to tell the frothing supporters of Zimmerman and Wilson that soon they will no longer be able to exercise their "God given right" to hog the roadways in the Hummers and F-250s with the "Global Whining" stickers plastered prominently on the back bumper. No one will likely speak for you then, Jim, because by when your white skin is no longer sufficient to shield you it really will be too late.


Bonus: "Fucking with me, 'cause I'm a teenager, with a little bit of gold and a pager"