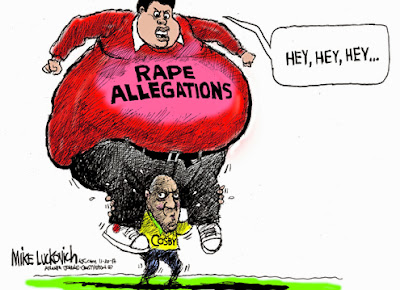 It's been a tough time recently for asshole moralizers of any race who like nothing more than to shake their collective finger at the black community and blame it for its own perceived failures rather than the institutionalized racism that, while it is not quite as omnipresent as in generations past, still remains very much a reality. A half-century after the landmark Civil Rights Act of 1964, shithead cops are gunning down 12-year-olds holding toy guns and choking to death street vendors while asshole prosecutors steer grand juries away from even indicting them. And if you're the kind of person who believes that Tamir Rice, Eric Garner or Michael Brown would have been killed had they been white, or that Garner and Brown's killers would have gotten away with killing them had they been white, then you are at best completely blinded to the kinds of injustice black Americans face on a routine basis.

Unless, of course, they manage to become rich celebrities. That's one thing that HAS changed for black Americans in the past 50 years. O.J. Simpson was the first black man to really benefit from the "celebritard effect," literally getting away with murder thanks to his trial turning into an out of control media circus and, not incidentally, the fact that the detective who found the key piece of evidence against him used the word "nigger" on the job like he was starring in a Tarrantino movie. At the time of O.J.'s acquittal, many white Americans were dismayed that so many blacks celebrated the verdict--much the same way I imagine the tables were turned here recently after the decision not to indict Darren Wilson. Personally, both results sickened me, but I'll admit to being pretty weird in that I happen to find the killing of innocent people repulsive no matter the race of the victim(s) and/or the perpetrator.

The recent events in Ferguson, Cleveland and New York City have unfolded coincident with appalling public spectacle and spectacular downfall of comedian, racial scold and apparent serial rapist Bill Cosby. Because a vast majority of Americans are apparently stupid enough to believe that the personality they see on teevee hawking Jello pops reflects the real character and personality of the individual doing the hawking, Bill Cosby's career was until very recently able to survive and prosper despite it being open secret for many years that he was in the habit of drugging and raping any young actress or model unlucky enough to come within 100 feet of him.

It particularly galls me to be writing such things about Cosby, who was a true childhood hero of mine. As a kid I had several of his old comedy albums, and listened to legendary routines like "The Chicken Heart" so many times that I was able to entertain other kids in the neighborhood (back in the bad old days before VHS or even Betamax players) by reciting them literally word for word. But given that my favorite athlete back then was Pete Rose, I guess I really shouldn't be at all surprised by this particular belated loss of childhood innocence.

Of course, like so many prominent Americans, Cosby wasn't immune from engaging in monumental hypocrisy and wagging his finger at the supposed failings of others of his own race. In his case, his target was black parents who were supposedly failing to teach their children proper standards of moral behavior. Until the rape scandal finally blew up in his face Cosby was still lecturing to black communities "about his frustrations with certain problems prevalent in underprivileged urban communities, such as illegal drugs; teenage pregnancy; Black Entertainment Television; high-school dropouts; anti-intellectualism; gangsta rap; vulgarity; thievery; offensive clothing; vanity; parental alienation; single-parenting; and failing to live up to the ideals of Frederick Douglass, Martin Luther King, Jr., and African-Americans who preceded Generation X."

Which if you think about it makes Cosby almost the perfect embodiment of 21st century America, believing itself to be an exceptional "shining city on a hill" spreading "freedom" and "democracy" around the world when the reality has been one long unbroken string of war crimes, torture and massive human rights abuses. Just as American police officers routinely abuse and murder black Americans with impunity, our soldiers, bombers, drone pilots and intelligence operatives have been doing the same thing to brown people living in North Africa, the Middle East and South Asia who desire nothing more unreasonable than to live their lives completely free of American interference and exploitation. Collectively, Americans think of themselves as Cliff Huxtable, when in fact they are really Charlie Manson.

The good news in Bill Cosby's case is that even though he is unlikely to be sent to prison where he belongs at least he has lived long enough to finally have his many crimes exposed and to see his legacy as one of America's most beloved entertainers utterly destroyed before his very eyes. It will take quite a while longer, I'm afraid, for America as a nation to receive a similar comeuppance--when its economy finally crashes for good and drags its hideous, bloated military-industrial complex down with it. And like Bill Cosby, when it does finally happen, rather than facing up to their country's many crimes most Americans will instead be wearing a befuddled look of utter incomprehension as it all comes crashing down around them.


Bonus: In retrospect this may well be the most offensive joke any major comedian ever told