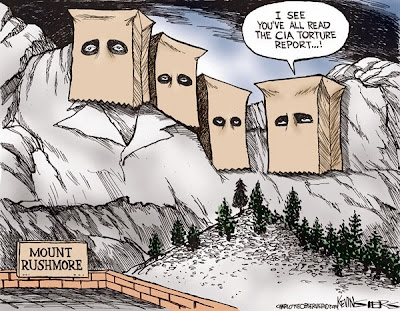 Fellow blogger Ian Welsh, one of the few opinion writers I have a tremendous respect for, today offered an very grim assessment of the fact that a majority of American citizens consumers idiots now approve of torture:


Before Bush, most Americans were against torture. The endless drumbeat of propaganda and the need to justify what America does (America is good, therefore America does not do evil), has had its effect.

I will make an ethical judgment: people think torture is justified are bad people. Depraved people. A society where a majority thinks it is justified is a depraved culture. (And remember, 51% think it was justified, but 20% don’t have an opinion. Only about a third of Americans are opposed.)

While I totally agree with Ian that America has become a depraved culture, I'm going to offer a slightly different assessment of at least some of the people who approve of torture. After all, the title of his post is contradictory to his conclusion.

It is one thing to offer an answer to a drily worded public opinion survey from the comfort and safety of your own home. It would be another to still favor torture after say, being forced to watch a video of the tactics the CIA was using in action. My bet is that after watching such a video, the number who approve of torture would drop sharply and the dumbass "no opinion" responses would also break overwhelmingly negative.

My point is that the ones who would still approve of torture after seeing it practiced are the truly "bad people" as Ian described them. The remainder are the easily led sheep (I really HATE the term "sheeple") who easily submit to authority and allow themselves to be propagandized. In much the same way that the Nazis were unable to win majority support in Germany until after they were handed power by a cabal of cynical nationalist politicians and could effectively drown out any competing voices from the public sphere, not until America's conservative media organs relentlessly flogged the Jack Nicholson, "You can't HANDLE the truth!" message did torture become an "acceptable" American practice. America's depraved leadership did not really "create" a depraved population, it merely led that population where it wanted it to go.

So does that mean I'm letting those Americans off the hook who are so shallow that they don't really even grasp the evil they are supporting? Fuck no. The only "Good Germans" circa 1933-1945 are those "political undesirables" who ended up in the concentration camps alongside the Jews, gays and Gypsies, or the rare ones who risked the very same fate by trying to hide would-be Nazi victims.

A truly sickening aspect of these public opinion findings for me is that nearly six years after war criminals George W. Bush and Dick Cheney left office I find myself more ashamed and disgusted by my own country than ever. And not that chickenshit Obama was going to use the release of this report to launch an inquiry to hold those responsible for the torture accountable anyway, but now he has even more incentive to stick his thumb up his ass and do nothing.

One last point: if you look at the actual poll results, you'll notice that even a plurality of black Americans now support torture. Which means there had to be quite a few torture supporters out protesting police violence this weekend. That such protestors are unable to make the connection between American war crimes committed overseas and the crimes being perpetrated by the police against their own kind back here at home is yet another dismal example of how there is no hope for America anymore.


Bonus: "You don't like the sound of the truth...coming from my mouth"