My Own Personal Version of the "Two Americas" 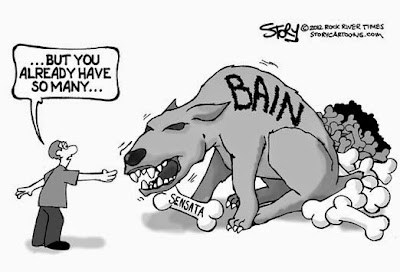 I've written numerous posts on this blog about my hometown of Freeport, Illinois, a small manufacturing center in the northwestern corner of the state that interestingly peaked in population (according to the U.S. Census Bureau) in 1970, the same year as conventional U.S. crude oil production. By the 1980s, Freeport was already hurting economically before NAFTA, GATT and the the economic crash of of 2008 really kicked it in the balls. The former Goodyear tire plant where my dad served most of his working life as a middle manager now employs roughly one-tenth the number of workers it did when he retired in the mid-1990s, and as I wrote about back during the 2012 presidential campaign, the local Sensata plant that was bought out by Bain Capital so the operations could be stripped down and shipped out to China is now effectively closed for good.

Meanwhile, like a good number of my high school classmates I split town permanently after I finished college--starting out my career in Chicago before decamping to the Washington area the month before Bill Clinton won his first term. Thanks to the insane levels of federal deficit spending that has accompanied the global war on terror and the economic bailouts after the crash, the DC area these days has become the ultimate boomtown. Everywhere you look there are new McMansions, shopping centers and 20-story office towers going up.

I currently live just outside the capital beltway in Fairfax County, Virginia, and was amazed to see a new sign go up in my neighborhood the other day proudly announcing that one of the few remaining empty spaces around here is about to see the erection of some new homes "starting" at a mere $1.1 million. Mind you, if other recent residential construction around here is any guide these won't be gigantic mansions surrounded by high security walls but oversize, cheaply built, ugly ass faux mansions squeezed onto lots not much bigger than the foundations of the the houses themselves. Once completed they will most likely be occupied either by upper middle class liberal twits or Ayn Rand worshipping contractor assholes who think selling 100% of their vastly overpriced services to the federal government makes them great businesspeople.

Over the holidays, I reconnected by phone with two of my old high school buddies who still live back in Freeport whom I had not seen or spoken with in a very long time, and who did not know about my recent cancer battle until I mentioned it in a note I sent with my Christmas cards. Fortunately, both of them are doing all right health wise and economically. In fact one is an engineer, bizarrely one of about 40 who still work in the office area of that former Sensata plant. He had a front row seat during the 2012 protests over the closing and subsequent election-induced media circus--but it haunts him now to walk through the empty factory facility that used to employ around 400 people, including a few friends from our old high school days.

He also told me another economic anecdote that was quite telling. Growing up, we were neighbors who lived not far from Freeport's east side, which is the older part of town where people who were stung by the first round of globalization in the late 1970s and 1980s began to cluster. As things grew worse, the blight of drugs, petty crime and broken down looking homes spread slowly westward until it eventually enveloped our old neighborhood. The last time I visited back in 2006, the house I where I'd lived was up for sale as part of a HUD auction after the family who bought it from my father had apparently been foreclosed upon.

Anyway, a guy my friend knows bought a house on that same block about ten years ago for around $49,000--as a globalization loser Freeport never really got caught up much in the housing bubble. Yet--and get this--with the continued decline of the neighborhood he now desperately wants to move but can't because he's too far underwater. That's sad not only for what it says about the current state of home values in my hometown but for the homeowner's apparent inability to pay off a house mortgaged a decade ago for about the price of the countless Lexus SUVs I see driving around in my current neighborhood.

I read recently that Brooklyn is now ranked as the least affordable housing market in America. There have also been numerous stories recently about the insane prices that high rise luxury condominiums are going for in midtown Manhattan these days. It doesn't take a genius to figure out which two sectors (other than Silicon Valley) have done the best in Obama's "zombie economy"--finance and government contracting. Yet the average American citizen consumer idiot insanely still believes they'll strike it rich someday playing in the former's rigged markets and that it really matters which party's politicians' pockets are being lined by both.

Back in 1970 my hometown, sporting a brand spanking new tire plant that was only six years old where my father (who was a recruiter then) had to travel all over the midwest to find enough warm bodies willing to make big bucks at what were admittedly physically demanding jobs, was an offshoot from places like Chicago, Detroit and Cleveland of an American manufacturing economy that supported the most robust middle class the world has ever seen. Though the seeds of the destruction of that economic model ultimately lay within that same peaking of crude oil production, it was the parallel rise of the zombie economy (aided and abetted by fearfully ignorant voters who repeatedly elected the same assholes who sold them down the river) that accelerated its demise.