Meth and Jesus in West Virginia 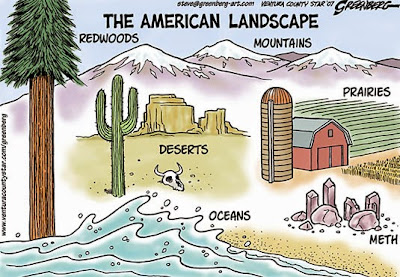 Vice magazine just published a grim but fascinating article featuring a woman whose business it is to clean up meth labs in West Virginia. The whole article is worth reading, but the last few paragraphs are particularly harrowing:


Beneath the surface in every case, there's evidence of hardcore drug use. It's almost a game when the three cleaners walk into a house to find the hidden syringes. They're under carpets or flood boards or sewn into mattresses. "We've found them in baby bottles," Jennifer says. "We found them in a hollowed-out Bible once."

"Where there are children involved, that's the worst part," offers Heath. "That affects me a little bit. Otherwise, it's just work." Kids live in 80 percent of the places they clean, he tells me.

Stories about meth often come with theories on why this particular drug has such a foothold in the boonies: Coke and heroin seem exotic and taboo. Meth helps with manual labor. Barns and remote, abandoned buildings provide cover for labs.

A lifelong West Virginian, Jennifer says she knows people who've used meth, "people I would have never expected until they told me. Contractors use it to stay up three days to finish a deadline." She's never had a bust in one of her rentals, though.

Jennifer notes the exploding popularity of some hard drugs in general, like heroin. She's seen enough pill bottles and dope paraphernalia in busted meth sites to think all these drugs are rising in popularity together, and she's seen enough Jesus tchotchkes and throw pillows to know they're all working their way into the banal fabric of normal life here.

Meth and Jesus, both providing false hope of relief from the agonies of living life mired in rural poverty in a bleak landscape where for all but a very few the American Dream has all but permanently disappeared. Rural America has become a place where one of the few decent livings to be had is cleaning up after the awful messes created by the downtrodden, desperate and destitute. Not that I begrudge the entrepreneurial spirit of the subjects of the article. Just that I find the whole thing profoundly sad.