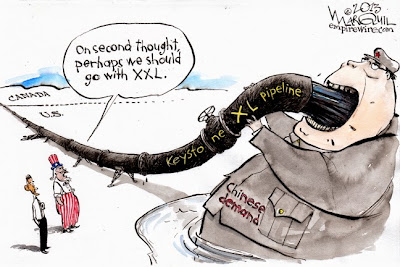 As I've said here repeatedly, sometimes you really have to shake your head at the sheer idiotic depths this country has sunk to. Though it really isn't a big surprise, newly (re)installed Senate Majority Leader Mitch McConnell just announced that the new Republican Senate's VERY FIRST PRIORITY will be to pass a bill forcing approval to allow the TransCanada corporation to build the controversial Keystone Pipeline. That's right, with all the many problems facing America these days, many of our current elected "leaders" believe that enacting a law that will enrich a FOREIGN COMPANY is the most important thing that needs to be done.

McConnell's announcement is supremely stupid on many levels. Let's start with the fact that the State Department is expected to render a final decision on Keystone later this year after a court case in Nebraska over the pipeline's proposed route is resolved. In other words, there is a chance--probably a very GOOD chance--that the pipeline will be approved in just a few months anyway. THEN there is the little matter of collapsing oil prices, which if they remain at or near their current levels for awhile will likely cause a shutdown of Canadian tar sands production--meaning there could very well be no oil to ship through the pipeline ANYWAY. Oh, and let's not forget that one of the supposed reasons to approve the pipeline--to help the U.S. become less reliant on Middle Eastern oil--totally contradicts all of the crowing in conservative circles about how our own domestic oil shale production is turning us into "Saudi America."

But let's put all of that aside for a moment and consider what it is that is really going on here--namely more sound and fury in the ongoing and sadly successful effort to convince American citizens consumers idiots that there really is a difference between the two parties and that American representative democracy is not in fact dead as a doornail. The biggest reason McConnell and company are making Keystone their top priority is that their troglodyte conservative base DESPISES environmentalists and right now this is the best way to very publicly score political points and stick it to the environmental movement. Forcing Obama to veto the bill (assuming he does) would allow the Republicans to demonstrate how they differ from blue tribe (Obama, of course, would no doubt prefer to sit back and allow the State Department to take the final decision out of his hands).

On the other side of the equation, the environmental movement has been almost as stupid in making the defeat of Keystone such a big (ahem) cornerstone of their own agenda. Even if the pipeline is never built and assuming oil prices quickly rise back into the territory that makes tar sands production economically viable once again, Canada has already indicated that it will build an alternative pipeline on its own soil since much of the tar sands oil is slated to be shipped out to Asia anyway. Assuming the dip in oil prices is short lived, an Obama veto would be at best a pyrrhic victory for the environmental movement. But hey, at least the Democrats would then have their very own "accomplishment" to sell to their idiot base as a reason to keep supporting them. After all, they'll need SOMETHING to point to in 2016 to try and claim that voting for Hillary is a better choice than voting for Jeb.


Bonus: So who's drinking WHOSE milkshake?