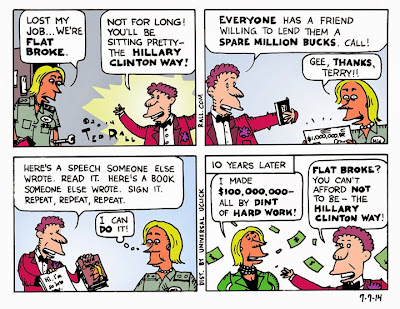 This late April Fool's joke by former Labor Secretary and "liberal firebrand" Robert Reich is so funny I really did laugh out loud:


Which brings me to Hillary Rodham Clinton.

Some wonder about the strength of her values and ideals. I don’t. I’ve known her since she was 19 years old, and have no doubt where her heart is. For her entire career she’s been deeply committed to equal opportunity and upward mobility.

Some worry she’s been too compromised by big money – that the circle of wealthy donors she and her husband have cultivated over the years has dulled her sensitivity to the struggling middle class and poor.

But it’s wrong to assume great wealth, or even a social circle of the wealthy, is incompatible with a deep commitment to reform...

Oh please Robert, stop it, I don't know how much more I can take. And just how is Queen Hillary supposed to show her "commitment to reform" anyway?


So we must resurrect the Glass-Steagall Act and bust up the biggest banks, so millions of Americans don’t ever again lose their homes, jobs, and savings because of Wall Street’s excesses.

Also: Increase taxes on the rich in order to finance the investments in schools and infrastructure the nation desperately needs.

Strengthen unions so working Americans have the bargaining power to get a fair share of the gains from economic growth.

Limit the deductibility of executive pay, and raise the minimum wage to $15 an hour.

And nominate Supreme Court justices who will reverse “Citizens United.”

Oh fuck it, I'm not laughing any more. I'm not laughing because it is obvious that Robert Reich is being a duplicitous piece of shit. Reich knows damn well which president signed the repeal of Glass-Stegall: Bill Fucking Clinton. And Reich was IN FUCKING OFFICE as Labor Secretary when Bill Fucking Clinton signed the first two major "free" trade agreements, NAFTA and GATT, into law. And he surely knows raising taxes on the rich or the federal minimum wage will be a total non-starter with the Republicans in charge of one or both houses of Congress. Not to mention that Reich cannot possibly believe that Hillary can get elected without mucho donations from Wall Street and big corporations, the spurning of which would likely put her at least a billion dollars behind Jeb in fundraising.

Some of you may think I'm being unfair to poor ol' Robert Reich. Yet I truly believe he is not a stupid man. Therefore, the only explanation I can come up with for why he wrote this particular piece of drivel is that he is lying through his teeth in order to give his delusional liberal/progressive audience false hope. Sadly, he is hardly alone in that regard.