Even Walmart Knows that Homophobia is Bad for Business 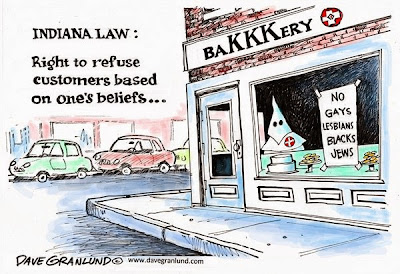 Almost everybody is familiar with the demographic marketing phrase: "the key 18 to 54 age group." As if every human being over or under that age range is somehow less valuable. Well, they are actually--at least to corporate America. The first half of that age group is supposedly when young adults form the brand loyalties and shopping habits that they will retain for a lifetime, while the latter half are in their prime earning (read: consumption) years. This is why marketing for most products other than dietary fiber supplements, incontinence garments and mobility scooters are slick, flashy and heavy on the "coolness" factor. Given a choice between possibly offending older consumers versus cementing brand loyalty of the 18 to 54'ers, most companies figure that while granny may indignantly chuck a slipper at the screen, she's unlikely to change her 50-year love of a particular breakfast cereal brand as a result.

All of this is a long winded way of explaining why Walmart shocked a lot of people when it came out strongly against the Arkansas religious "freedom" measure that was very similar to Indiana's. It was one thing for Apple to condemn the Indiana law--Apple presumably has lots of gay and lesbian customers and the bigoted old white fuckers who support these shitty discriminatory laws aren't likely to ever understand how a smartphone works, let alone ever buy one. But the stereotype is that Walmart customers are exactly the kind of Fox News watching, assault rifle totin,' Jesus lovin' morons who would applaud a law like this. After all, to cite another common but probably not completely inaccurate stereotype, your average gay couple's tastes in home furnishings do not likely run to the kind of clapboard crap on display at Sam Walton's megastore hellholes--nor would they ever want to be caught dead wearing the sweatshop assembled, ill-fitting polyester dress shirts hanging on the clothing racks.

Walmart probably could have stayed quiet regarding the proposed Arkansas law. After all, no one was ASKING the company for its opinion. The fact that it chose to say something represents an obvious awareness that younger Americans, even those less financially well off, on average tend to be more socially tolerant than older ones. Young adults today are far more likely to have friends who are openly gay than their older cohorts. Walmart just found a free way to get the best advertising it could have in the form of news stories that will make little Brandi and Justin feel better about shopping there so they will hopefully develop a lifelong habit. After all, what are Bessie and Elmer going to do, stuck as they are on a fixed income and living in a trailer with no savings account, suddenly boycott Wally World in favor of Nieman Marcus?

So let's all get our warm and fuzzys about this shining example of good corporate citizenship without getting all wrapped up in the truth of the matter, which is that if they didn't think it would help improve their bottom line the greedy fuckers who own and run Walmart wouldn't have said jack shit. And let's not ponder the day when predatory megacorporations like America's biggest retailer have finally destroyed the livelihood of average Americans to the point where even most gay and lesbian couples have no choice but to shop there whether they like it or not.


Bonus: "Indiana wants me--but I can't go back there"