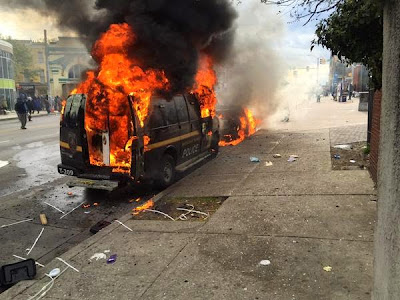 I'll admit that by titling this post as I have and tying it to the riots in Baltimore I'm running this risk of being misunderstood. First of all, lets keep what's happening in perspective. Compared to the LA riots after the initial Rodney King trial, or the many conflagrations that consumed American inner cities during the 1960s, what happened today is like a firecracker going off next to a keg of dynamite. A few cops got injured, a few stored got looted and few cars were burned. By comparison, the LA riots resulted in 53 deaths and over 2000 injuries.

Secondly, I have no doubt that there are plenty of white bigots and racists who are already blaming the president for what they are seeing on their teevee screens. And while I agree with them that a large share of the blame DOES reside with our feckless commender-in-chief, it certainly is NOT for the reasons they think: namely that this is all part of the "socialist-communist-muslim" Obama's "plan" to "undermine" America and turn it over to the Islamic State...or something equally ridiculous.

No, Obama deserves much of the blame for plenty of other reasons. It was, after all, his 2008 campaign that raised the hopes and dreams of black Americans and led them to foolishly believe that having one of their own in the White House would mean they would finally have someone in a position of high power who understood the very real institutional barriers still preventing them from achieving economic parity with whites. It was Obama himself who then deliberately sold out those hopes and dreams by not lifting a finger to help black America (or anyone else who isn't rich) once in office. Obama's administration has presided over an even greater spread of wealth inequality between the rich (mostly white men) and everyone else (blacks included), and his so-called economic recovery has benefitted only about the top 10% of the population, while the lower 90% finds itself more economically stressed than at any time since the Great Depression. Obama has also greatly contributed to this country's culture of violence and the idea that settling disputes requires guns, bombs, missiles and predator drones aimed at non-whites overseas who refuse to to accept American hegemony over the planet.

But finally and most importantly, Obama and his administration has stood around with its thumb up its ass while police killing incident after police killing incident has occurred without any attempt to have his Department of Justice forcefully step in with aggressive civil rights prosecutions--as Daddy Bush did after the Rodney King trial not guilty verdict. Time after time, from George Zimmerman to Darren Wilson and now on to a steady onslaught of cases, cops and cop wannabees have been killing young black men in cold blood without being punished while Obama has done nothing except for what he's best at--running his fucking mouth. Conversely to what the racists and bigots think, it is my contention that Obama's presence in the White House actually served as a distraction that PREVENTED this kind of rioting from breaking out sooner. Eventually, however, as incident after incident unfolded the pressure was going to inevitably increase to the boiling point.

In his seventh year in office, we have reached the point where Obama's America is finally approaching maturity. Thanks to the hopes he raised in order to con his way into the Oval Office and his complete subservience to a corporate America he no doubt hopes will make him a very rich man upon leaving office (as it has the Clintons), the fault lines that were already there are deepening and widening ever so slowly to the point where we are now feeling the first minor tremors presaging a potential future major earthquake that will shake our body politic to its foundations. For awhile now those tremors could be heard in the increasingly hateful right-wing rhetoric being employed against blacks, gays, Muslims and the poor. And as of today, they can now be seen in the looted stores and burning police cars dotting the streets of downtown Baltimore.

Bonus: "There was a shooting...police on my back"