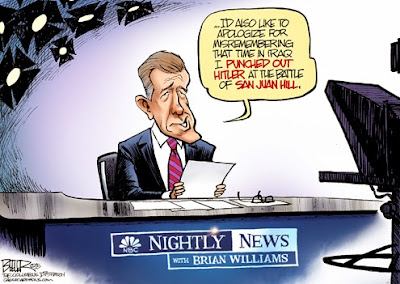 If as the old adage goes, "the worst kind of liar is the one who thinks he's telling the truth," then Brian Williams is the worst kind of liar. We little people rarely get to peak behind the facade of what the late, great Joe Bageant called: The American Hologram, so we usually don't have any idea just how much the blow dried airheads who get the paid big money to go on teevee and spout the empire's propaganda are actually in on the joke. The funniest aspect of the current predicament of suspended NBC anchorman Brian Williams is that his likely downfall will come as the result of telling lies--and that the lies that have put him in such deep shit are of such little consequence compared to the ones that tumbled out of his mouth every fucking night he stepped into the NBC "news" studio.

Williams's public persona was always as one of the least objectionable members of the propaganda ministry in that he seemed just as at home trading good natured barbs with Jon Stewart and Conan O'Brien as he did reading bullshit from a teleprompter. But the real Brian Williams was exactly the kind of asshole who, despite becoming massively wealthy while holding down one of the most coveted positions in all media, just HAD to make himself out as some sort of Rambo action figure. Not content to just sit on the sidelines lines cheering on "the troops," he decided he had to BE one of them, or at least to make people believe he is his generation's Ernie Pyle--dodging bullets and artillery fire right there with the grunts on the front line.

All that was bad enough, but yesterday Vanity Fair posted a story in which Williams is finally revealed to be the worst kind of liar--a man so soulless and devoid of personal awareness that he fervently believed that not only was he not a liar, but that he is in fact INCAPABLE of lying:


Within NBC, Burrough writes, Williams floated an even more absurd and cowardly explanation (bolding ours) for his prevarications:

“[Williams] couldn't say the words ‘I lied,’” recalls one NBC insider. “We could not force his mouth to form the words ‘I lied.’ He couldn’t explain what had happened. [He said,] ‘Did something happen to [my] head? Maybe I had a brain tumor, or something in my head?’ He just didn’t know. We just didn’t know. We had no clear sense what had happened. We got the best [apology] we could get.”

As my readers well know, I've spent the last two years battling and then recuperating from pancreatic cancer. During the seemingly endless hours I spent attached to a IV line pumping those horrid chemotherapy chemicals into my body, I once had the very upsetting experience of watching a young man of about twenty being brought into the clinic in a wheelchair, then picked up by an orderly and placed in a nearby chair. He was completely bald, and had lost most of his motor skills--including the ability to speak intelligibly--thanks to a massive tumor that was slowly eating away at his brain. Relatedly, a good friend of my wife just recently lost her husband (and father of their 10-year-old son) after a five year battle with brain cancer that at the end left him bedridden, helpless and in constant excruciating agony.

THAT is the kind of thing that usually happens to a person who has a brain tumor, Brian Williams, you disgusting egomaniacal piece of shit. For 11 excruciating years you were paid countless millions of dollars by America's oligarchical elite to spew whatever lies they wanted you tell to keep the dimwits who foolishly believe that any kind of truth will be broadcast on a network formerly owned by a giant defense war contractor; paid for by advertisements on behalf the country's biggest corporations docile. For you to compare yourself to people who are suffering and dying one the most miserable forms of death there is to be had in this world to me makes you a far bigger scumbag than comparing yourself to soldiers from a mercenary army fighting a one-sided war.

Take your fucking money and crawl back into whatever hole it was you climbed out of, and may we all be spared from ever again having to abuse our eyeballs with your hideous visage.


Bonus: Dedicated to Brian Williams--just another "fevered ego" that is tainting our collective unconscious