Mad Men and the "Death of the American Dream" 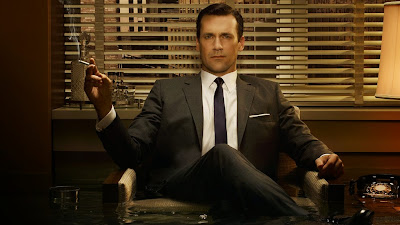 During my recent illness I became a huge fan of two vastly different television shows, Breaking Bad and Mad Men, that each in their own way do a fantastic job of showing just how empty the pursuit of the "American Dream" really is. Breaking Bad's Walter White becomes unhinged after being diagnosed with inoperable lung cancer and decides to use his remaining time alive cooking meth in order to build the fortune that eluded him in the straight world and that he felt he deserved. Mad Men paints with a broader brush (though there are key similarities between Walter White and the latter show's Don Draper), but at its heart are a group of characters--ad executives in the 1960s and their supporting office staff--whose lives become ever emptier even as they come to enjoy more and more material success.

The final seven episodes of Mad Men are just now being broadcast, and while watching the premier last Sunday the first thing that struck me was that the characters now find themselves in 1970, the year conventional American oil production peaked. I doubt Matthew Weiner, Mad Men's creator, took that particular factoid into account while setting up the show's conclusion, but given how many electrons have been annoyed in cyberspace by various writers analyzing the show's portrayal of the perils of pursuing material success just for success's sake, the ending taking place the year America's organic "material success" was peaking is quite relevant.

Don Draper--the dirt poor impostor who changed his identity and hustled his way to a partnership in a major Madison Avenue ad agency--has been described by Weiner as having grown up "one generation away from living without plumbing." My father just turned 80 this year, making him only a few years younger than the fictional Don Draper, and he has described to me how his father--a World War I veteran--lost his small trucking business in the early 1930s and then subsequently dragged the family all over the Midwest desperately searching for a way to recapture that tiny bit of the pie he had managed to slice for himself. Eventually he would settle for a factory job back in my hometown, but losing that chance to become a big shot-- even in a small pond--left him emotionally broken for the rest of his life.

One of the ongoing story lines in Mad Men involves Don's relationship with his estranged teenage daughter, Sally, and how he has a hard time trying to figure out why she's so unhappy despite having every comfort he never had growing up. On the show Sally Draper represents the Baby Boomer generation, the first to be raised with television and, not incidentally, to be bombarded with the ads Don and his cohorts so intensively labor developing. Sally may be too young to yet participate in the rat race (or to be the trophy wife of a successful businessman as her shallow and vain mother wants her to be), but her's is the first generation to be brainwashed from the start by media advertising, leaving her unable to recognize that that fancy new designer purse she just bought at Macy's will not make her any happier.

As Mad Men draws to a close, it will no doubt bring some sort of closure to the story arcs of its major characters. But the big picture it has spent seven years of broadcasts painting will in fact be only halfway completed. The second half of the story is unfolding in our current times, at the back end of the lifespan of the fictional Don Draper (assuming he like my father is now living out his golden years in the sort of retirement that became the middle class American ideal but for which only that generation on the whole ever got to enjoy). Draper and my father grew up one generation removed from living without plumbing. As a baby boomer and an elder Gen-X'er, Sally Draper and I were among the first to grow up expecting that a limitless cornucopia of consumer goods would always be available at our fingertips--assuming we were willing to either climb on the big treadmill or marry someone really successful so that we could afford it.

Sally Draper's children, however (I do not have any of my own) and especially her grandchildren are going to be the ones who find out just how big the lies her father told for a living really were. Mad Men has been very good at portraying just how the pursuit of the American Dream can consume a person's soul. What Mad Men will not be showing is what happens when the resources needed to support the kind of lifestyle being sold by Don Draper start running out. Sally Draper's grandchildren are likely going to be the first since Don Draper's parents to discover what it is like to live without plumbing...and they'll be LUCKY if that's as bad as it gets.

That's the show that is playing out in real life every day right now. I doubt if 50 years from now anyone will be putting it on television--or that that most people will have the time to spare from just trying not to starve to watch it if they did.


Bonus: "Even though success is a reality, its effects are temporary"