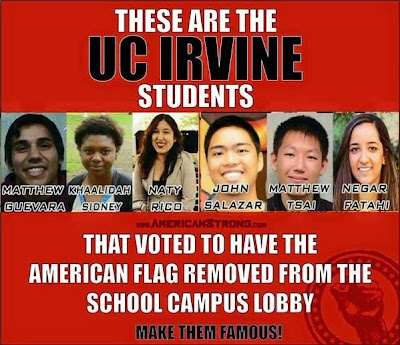 As our society just keeps on getting dumber and dumber, the bar for what constitutes a controversy just keeps on getting lower and lower. I'm specifically referring to the completely over the top media coverage of the decision by a student panel to ban ALL national flags (not just the U.S. flag, Natch) from the office of the Associated Students of University of California, Irvine, because such flags promote "...nationalism, including U.S. nationalism, (which) often contributes to racism and xenophobia, and that the paraphernalia of nationalism is in fact often used to intimidate." The backlash caused by this controversy has already very much proved the student panel's point, but its very predictability shows that standing up for what you believe in probably isn't the best course of action if it all it does is put you at personal risk without achieving anything.

The problem is that reading or hearing about this story is going to cause one of five reactions in about 99.9% of the population:

1). Rabid conservatives will use this as yet another excuse to get outraged about something that frankly doesn't affect their lives one damn bit and is really none of their business--and some will even be angry enough to wish personal harm upon the students who voted for the measure.

2). Ignorant clods will side with the rabid conservatives because they won't take the time to try and understand what the student panel was really trying to say by making this decision.

3). Some liberals will agree with the student's decision and get just as outraged by the backlash as the conservatives are by the decision itself.

4). Other liberals might agree with the panel's decision but will be either too afraid to say so publicly or will offer up some lame ass apologetic defense of the move.

5). Know nothing dipshits will be too busy paying attention to what the Kardashian clan, Miley Cyrus and Justin Bieber are doing to give a shit one way or another.

And beyond that 99.9% are the very tiny number of us critical thinkers who will shake our head in disgust for about the millionth time that a story that shouldn't have reported beyond perhaps the UC Irvine student newspaper is instead managing to kill countless billions of brain cells from coast to coast. We are the few who recognize that the oligarchs who control the media use such frivolous and manufactured controversies to keep the engaged portion of that 99.9% divided and at each other's throat's politically so they can slowly strip away all of the nation's wealth and prosperity and pocket it for themselves.

I really wouldn't expect the students themselves to understand such bigger picture issues, but according to the linked article 60 prominent professors at UC-Irvine have now signed a petition supporting their action. Sadly, the wiser adult counsel before all of this started probably would have been to tell the young'uns that they completely understand their point, but whipping up this particular shit storm is not going to change the minds of anyone in those five categories. It will instead paint a big ol' target on your backs and will, by feeding the vacuous media outrage machine, actually help contribute to making matters even worse.


Bonus: "Our emotions are running wild and our mind has stopped"