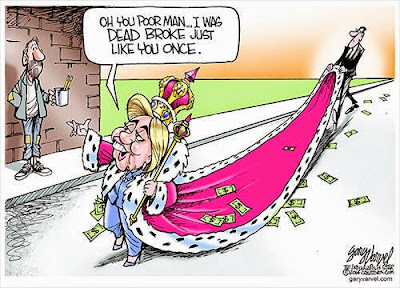 It would be perversely amusing if what will likely be by far the most expensive presidential election campaign ever is actually decided by an outside factor completely out of the candidates' control. As it stands now, just over 19 months away from the November 2016 balloting, the final stages of the Obama administration look to be eerily similar to that of the Bush administration before it. Like Obama, at this point in his presidency Bush faced an overwhelmingly hostile congress, which greatly limited his ability to maneuver on domestic and economic issues. Like his predecessor, Obama is also hoping that an impending crash in an important segment of the economy (fracking this time versus housing under Bush) doesn't take the stock market down with it and thus destroy his party's chances of retaining the White House after his departure.

Poor Hillary. If the likely 2016 matchup pitting her against Jeb were to happen tomorrow she'd likely win. The higher turnout and lack of gerrymandering in presidential races favors the Democrats, and there are plenty of women voters who will be energized by the thought of placing one of their own in the White House despite the fact that her record indicates that she will be even less sympathetic to the concerns of the Democratic base than Obama has been. But all she can do is desperately hope that Obama is able to keep the illusion of recovery going long enough to avoid another stock market crash before the election.

Back in 2008 John McCain was actually gaining ground on Obama despite the albatross of Sarah Palin hanging around his neck. He nearly pulled even in the polls just in time for the bottom to fall out on the market, taking his chances to win the election down with it. A similar occurrence this time around would almost certainly be enough to tip the balance Jeb's way.

The Democrats will no doubt shriek about all of the horrible things another Bush presidency will bring, especially in combination with a Republican controlled Congress. In reality, however, a Jeb presidency will likely not be a radical departure from Obama--just as Obama has largely steered the same course as Jeb's idiot brother. Take the possibility of war with Iran, for example, as one issue in which there would appear to be a huge difference between the parties. The true elites who run this country seem to sense that even airstrikes on Iran would likely be very bad for business. Thus, even he though he will be pushed into sounding warlike while stumping for the nomination to appease his party's neocons, President Jeb would likely continue Obama's strategy of negotiation--no matter what Bibi and his fifth column allies in Congress might want.

The biggest laugh will be if under a Jeb presidency repealing Obamacare suddenly disappears as a Republican Party priority. No doubt the party will make a show of TRYING to repeal the supposedly hated "socialist" program, but damn if those 40-odd Democrats in the Senate won't magically be able to thwart them for Jeb's entire term by placing a seemingly permanent filibuster on all repeal attempts. If Fox News suddenly stops talking about Obamacare after Jeb is elected, you'll know the fix is in and the program won't be going anywhere.

At this point, I'm leaning towards rooting for a Jeb victory just because it will be so much fun to watch Hillary being ultimately thwarted after compromising every principle she ever had as a former antiwar 60s radical, swallowing her pride and staying with Bill after the Monica Lewinsky scandal broke, whoring herself out to Wall Street as a New York senator and then having her 2008 electoral ambitions derailed largely because of her "Yes" vote on the Iraq War. Wouldn't it be just awesome to see her snap during her concession speech and start to strangle Bill on live television?

That last part would never happen, of course. But a lonely blogger can dream, can't he?


Bonus: "God save the queen--she ain't no human being"