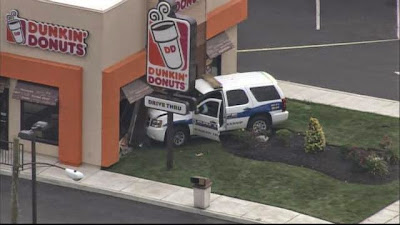 Here's a headline that made me chuckle:

What, just one? I believe if you removed every ingredient in a Dunkin Donut that causes obesity, diabetes, gallstones, high blood pressure and heart disease you wouldn't have anything left but the hole (bah-dah BOOM!).

So what is it that's being removed?


Dunkin Donuts has announced it will be changing the recipe of its doughnuts.

The coffee chain said it will remove the titanium dioxide, a food coloring agent, from all of its powdered sugar products, including doughnuts.

Some groups said it could also lead to health problems like inflammation or even organ damage.

So, out with the product that sounds like it should go into making gulf clubs rather than something a person would actually eat because of vague warnings from the ever nebulous "some groups." And while its removal is likely a good thing, there's still the matter of the:

Actually, I have no idea what most of that shit is, but it all adds up to 260 calories and 30% of your recommended daily allowance of saturated fat--for just one lousy glazed donut.

But hey, I'm sure this move will turn these little fat pills into virtual health food.


Bonus: "As if there has ever been a good reason to eat a donut"