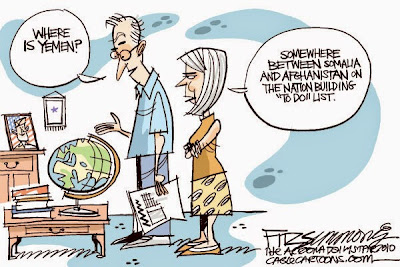 As I've stated before on this blog I pay next to zero attention to American teevee news, particularly the cable news channels. It was only because I was at the gym on Wednesday trying to rebuild the considerable amount of muscle mass I lost after my cancer surgery last year that I even saw (up on the overhead screens) how CNN was reporting on the overthrow of the government of Yemen. There was the tired old visage of Wolf Blitzer, with the screaming headline CRISIS IN YEMEN affixed in front of him.

I had my Ipod on, so I have no idea what Blitzer was saying nor do I give even the tiniest fraction of a shit. It just amused me as it always does to see the American propaganda machine in action. Interesting how we are always told that Americans have no interest in what is going on outside their own country--which has been used as a justification to close down foreign press bureaus in capital cities around the world--yet when there is a coup in a country that probably less than 5% of Americans could even find on a map it suddenly makes huge headlines.

Why would that be? But of course it would be so that yet another armed group that's decided it has had just about enough of American hegemony and interference where they live can be demonized--thereby justifying the continuance of the war on terror and America's absolutely insane levels of defense war spending. The only place on U.S. soil where current events in Yemen represent a "crisis" is in the "exalted" halls of Washington's foreign policy establishment, which has just seen another one of its brilliant plans for world domination turn into utter shit.

I would almost certainly bet that Blitzer did not mention the U.S. role in deposing Yemen's previous long time president back in 2012. Blitzer may have said something about all the the predator drone strikes employed against "Al Queda" in that country, but I would bet a decent amount of money that he did not make the connection for his viewers between the wanton killing being done by U.S. missiles and the understandable popular anger that helped lead to yet another American client government being unceremoniously shown the door.

Crisis? How exactly is the situation in Yemen a "crisis" to the average American--the same dumbass American who as I've been pointing out on this blog is too ill informed and apathetic to even have an effective voice in his/her own municipal governance. Americans compliantly allow their own mayors, city councilmen/women and state representatives to fuck them up the ass on a regular basis on behalf of their wealthy paymasters, and yet our alleged number one source of "news" focuses their attention and odium towards the latest group of predatory creatures to be in charge over in Aden. Aden? Who or what the fuck is Aden, anyway?

The only thing that would make the hyping of this story more perfect was if rather than Yemen the country was instead called Eastasia.

Bonus: "Once again, I was watching CNN and they blew up all the anxiety"