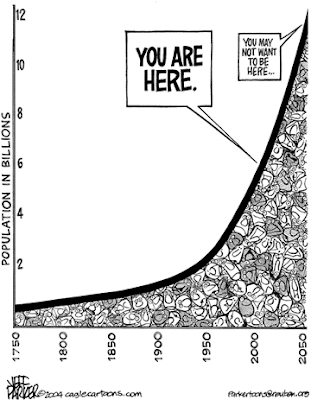 (Editorial note: There was a BBC report earlier this week which raised the alarm about world population growth, stating that rather than leveling off at around 9 billion by 2050, as previously postulated by the UN, that the population could instead reach 12 billion by the year 2100. Just prior to the publication of that article, I wrote the post below in which rather than having a team of scientists furiously studying their latest computer algorithms, I just used a simple calculator and a world population counter to come to basically the same conclusion. I've decided not to alter my original post in light of the BBC report, just to show that figuring this stuff out isn't nearly as hard to do as the "experts" would like you to believe it is).

As I highlighted at the time here at TDS, on Halloween Day 2011 at exactly 1:48 P.M. the poplation counter site Worldometers estimated that the world had just added its 7,000,000,000th living human. Not to worry, the optimists assured us, birthrates around the globe have been declining since 1960s and it's a well known "fact" that when the wealth of societies increase, women on average start having fewer babies. Some optimists who study these issues have gone as far as to say that world population will level off at around 9,000,000,000 by around the year 2050.

Ahhh...optimists. They are just so much fun to poke with a rhetorical stick. I don't think I'll ever get tired of it.

Let's start by reminding everybody where we have come from. The data shows that it was upon reaching the 3 billion mark in 1959 that human population numbers realy began to spiral out of control. From that level the world raced to 4 billion in 1974 (just 15 years later) and 5 billion in 1987 (just 13 years after that). The last two milestones were each reached in exactly one dozen years, 6 billion in 1999 and 7 billion in 2011. Admittedly, the raw numbers DO indicate a slow down in birth rates, but the sheer size of the the current human population has caused the momentum of increase to lumber steadily forward anyway. Already we are in a situation where I, one of the eldest members of Generation X, have seen the human population of planet Earth double in just my lifetime.

In that spirit, let's have a little check of the Worldometers website again today, three years after the adding of the 7th billion person, and see if we can see any signs of a continuing slowdown in population growth. Hmmm, seems the total now is slightly above 7,270,000,000. That means that for the last three years the AVERAGE annual increase in human beings was 90,000,000. At that rate, the world's 8 billionth person will be born in 2022, just ELEVEN years after the previous milestone was reached. Extrapolate out further, and world population at midcentury will be around 10.5 billion, not the 9 billion the optimists were touting.

So why have the optimists apparently been proven wrong? Well, the one big elephant in the room is the fact that the the world economy for anyone who isn't among the elites has pretty much sucked since the financial crash of 2008. So much for the idea of rising prosperity serving as a gigantic prophylactic.

There has rightly been lots of worry about ebola, but to put the epidemic in perspective right now it would have to kill about 90,000,000 people PER YEAR just to level off the planet's population. So, as if we didn't have enough real world events to scare us this Halloween, here's an oldie but a goody that just continues to make calls from INSIDE THE HOUSE.

(2nd editorial note: putting aside for a moment the fact that resource depletion will likely not allow continued human population growth beyond midcentury, if the planet did theoretically have the resources and we did in fact reach 10.5 billion in population by 2050, even the BBC report's "pessimistic" assessment of 12 billion humans in 2100 would likely be well off on the low side)