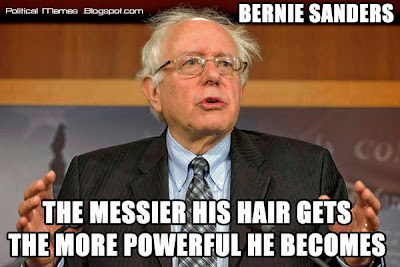 Great news everybody! The one supposed political "socialist" U.S. politician of any stature, Vermont Senator Bernie Sanders, is running for president in 2016:


While Democrats quietly wait for Hillary Clinton to declare her presidential plans, Sanders has publicly made it clear that he plans to challenge the party’s heir apparent from the left, tapping into a growing wave of populism among liberal activists upset about issues like income inequality, climate change, and corporate cronyism. Already he’s making moves that threaten to complicate Clinton’s presumptive White House bid, popping up at events in Iowa and New Hampshire, on Meet the Press, and at progressive rallies like last month’s Climate Change March to build support for a grassroots “revolution” that he sees as a progressive response to the Tea Party movement.

Sure sounds good, doesn't it?

Oh, don't get too excited, because I'm about to tell you why this development isn't all it's cracked up to be. Personally, I would love a chance to vote for Bernie Sanders who, now that Russ Feingold and Dennis Kucinich have given up the good fight, is one of the very few remaining American politicians I have any respect for whatsoever. There's only one little problem--Bernie's got a snowball's chance in you-know-where of upending Queen Hillary as the Democratic nominee, and if all he's planning to do is tilt at that particular windmill then he might as well just forget about it and not waste everybody's time.

Not only will he not be the nominee, but Bernie knows WHY he could never be, even if he's if willing to blow smoke up his supporters' collective skirts about it. In the interview linked above, he discusses the Citizens United Supreme Court decision:


Q - Do you think it’s possible that Congress would pass a constitutional amendment that would overturn Citizens United, or is that just a pipe dream?

A - Well, as you know, although it didn’t get much media coverage, we debated that issue a few weeks ago in the Senate, and every Republican voted against proceeding to a legislation that would overturn Citizens United. I think that the overwhelming majority of Americans—Republicans, Democrats, and independents—understand that Citizens United is a disastrous decision that is having a profoundly negative impact on American democracy. I believe that if we are capable of mounting the kind of strong grassroots effort that we need, which means getting state legislatures on board, city councils on board, millions of people on board, then yes, I do believe we can overturn it.

Really, Bernie? In order to overturn a Constitutional Amendment, as you yourself no doubt realize, it takes a two-thirds majority of both houses of Congress to pass the amendment and then it has to be approved by three-fourths of all 50 state legislatures. In other words, IT ISN'T GOING TO HAPPEN, not by 2016, not bloody likely ever. No matter how unpopular the law may be or may become going forward, all the billionaires have to do is keep a small minority of the politicians in their pockets. In other words, child's play for the group of assholes who can flush just about any obstructionist's political career down the toilet while hardly breaking a sweat.

Bernie then gets even more daft (or willfully deceitful) when discussing the fact that billionaires give money to the Democrats as well as the Republicans:


Q - Democrats have also been able to get plenty of billionaires donating on their side. Does that present similar issues? Or is it a case of Good Billionaires vs. Bad Billionaires?

A - Let me respond in two ways. I think the media has said, “Both sides are getting money from the very rich.” The answer is yes and no. The truth is that the Republicans are receiving a lot more money from the very wealthy, from the Koch brothers alone—who I understand will put $400 million into this campaign—not to mention many other people. So it is not a question of equivalence. One side is getting far, far more from the very rich than the other side is.

Here Bernie drags out those great progressive boogeymen, the Koch Brothers, but fails to mention that President Hopey-Changey got at least as much support from Wall Street and the billionaires in 2012 as Romney did--and if he hadn't he wouldn't still be president. But there's another issue here, the 600-pound gorilla in the closet, if you will. Who you 'spose is going to going to get all of Barry O's wealthy donors THIS time around. Why, that would be Queen Hillary, herself, of course, which is why the 2016 Democratic nomination is already locked up tighter than fish's sphincter.

But there is a way, Bernie, that you could actually do some good during the upcoming presidential election fiasco--forget running for the Democratic nomination and go the third party route. Heck, I'm sure the Greens would love to have a nominee of your stature, and then you wouldn't have to be burdened with the necessity of getting enough signatures to get on the ballot in all 50 states.

But Bill, I hear Bernie asking, wouldn't that just hand the election to the Republicans? Quite possibly, and they'd likely also have a majority in both houses of Congress as well. Then, the American people could watch as they finally get what so many of them have so sorely wanted since the election of Bonzo Ray-gun in 1980. They get to watch as the party of fundamentalist whack jobs and cretinous troglodytes burns the fucking house down out of sheer spite. If there is one thing the disastrous final months of the Oval Office tenure of Chimpy Bush showed, it's that the elite assholes who pull the puppet strings aren't nearly as much in control of events as they think they are. And THEN, after the citizens consumers morons have had their collective noses rubbed in the ashes of the ruins they so willfully helped create, MAYBE the dumbfucks will be finally ready to hear your message, Bernie.

Well, perhaps not even then. But a lonely blogger can dream, can't he?


Bonus: "What did you do about it? You stunk up a park for almost a year!"