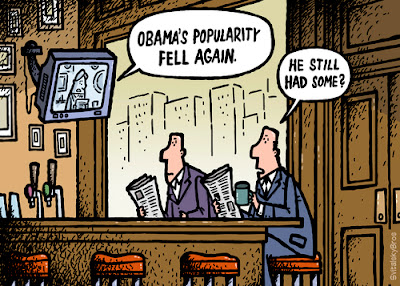 Six years ago on election day I was working in an office building in Arlington, Virginia, a stone's throw from the Potomac River that separates the Old Dominion from Washington, D.C. Arlington is a fairly liberal city to start with, and where I worked happened to be a mere one metro stop from George Washington University as well as a brisk walk across the Francis Scott Key Bridge from Georgetown University. Which probably explains what I saw that election day, namely dozens of college age young adults standing on every street corner at every major intersection holding up (mostly hand lettered) Obama signs, waving and clapping at every car that passed. I could see them from my office window, and despite it being quite cloudy and chilly they were there all day and were still at it when I left work around sundown. It was the fifth presidential election held while I was working at that address, and I'd never seen a literal outpouring of support like that--not even when Bill Clinton was on the ballot.

"Those kids are going to end up being mightily disappointed," one of my middle-aged colleagues said to me that morning as we were looking out the window.

This was about six weeks after Senator Obama had enthusiastically helped ram the hideous $700 billion bank bailout known as the TARP law down Congress's throat, and as much as I wanted to argue with him, all I could do was nod in agreement. Before going in to work that morning, against all of my instincts to the contrary I had waited in line to vote for Obama myself. As of this writing, it was the last time I've ever participated in the sham that is American "representative democracy."

It's so easy to forget now because Obama sold his supporters down the river so quickly just what an amazing tidal wave of enthusiastic support he rode into office on. Except for hardcore Republicans, people were SO sick of Chimpy Bush that pretty much ANYONE would have been greeted with at least SOME level of excitement. None of the so-called "million man (or woman) marches" on the Washington mall have ever had in reality nearly that many "boots on the ground," except for perhaps for his inauguration two months later.

So, it hasn't even been six full years since election day 2008, how's it going for President Hopey Changey on the popularity front these days? Worse than even what my colleague had envisioned, as reported by Reuters:


Most candidates from his party have been wary of appearing with him during their election races because of his sagging popularity.

"You've got to vote," Obama repeated over and over at a rally for Brown in Upper Marlboro, Maryland, near Washington.

Democrats have a history of not turning up to vote in midterm elections.

"There are no excuses. The future is up to us," Obama said.

A steady stream of people walked out of the auditorium while he spoke, however, and a heckler interrupted his remarks.

Most amazingly, pictures from the event show that the crowd was overwhelmingly black, which would not be surprising as the event was held in Prince Georges County, Maryland, which has a nearly two-thirds black majority population. If Obama can't even appear there without being heckled and having people walk out on him, then there really isn't anywhere he CAN appear in public anymore without resorting to the type of heavy-handed audience screening tactics Bush's team used to use during his second term.

What's interesting about Obama's deep unpopularity is that, unlike Bush, he hasn't been such an OBVIOUS disaster while in office. He hasn't fucked up two imperial wars and crashed the economy like his predecessor did. In fact, the stock market has more than doubled in value since he took office and his wars have mostly been of the air-and-drone variety that don't get the legionaries soldiers killed.

Instead, he's lost many of his supporters, some of whom are no doubt those same college kids I saw waving those signs back in 2008, simply by turning his back on everything he purportedly would do once he became president to cure all the ills of the Bush years. Nevermind that all the signs of a sellout were already there, including his backing of the TARP law and naming the credit card companies' best friend in Washington to be his VP, well before the polling began six years ago.

It should be evident now to anyone who is even remotely paying attention and isn't still wearing partisan blinders (of EITHER shade) that Obama is the creature/puppet of the big business and Wall Street interests who gave his campaign a billion dollars or so for his reelection in 2012, just as Romney would have been had he been elected instead. And of course, most of the major players donated to both campaigns so they'd have all their bases covered. As the current value of the DOW shows THEY were the true "winners" of campaigns 2008 & 2012.

So what we're stuck with now is a prolonged national malaise that still has two years to run until the next election that will convince at least part of the population that there is still hope that things can change despite all the evidence to the contrary. I suspect, however, that with the Citizens United decision allowing the big money to lock up the presidential nominations even easier than ever, that the percentage of those who will truly believe in the possibility of hope and change and that their vote actually matters will be far, far lower than it was back in 2008. And I'll be very surprised if on election day 2016 I see any young people standing on the street corners all day joyfully waving their handmade signs.


Bonus: Sorry kids, but "Walking around with your head in the clouds makes no sense at all"