American Households are Getting Wrecked by Medical Debt 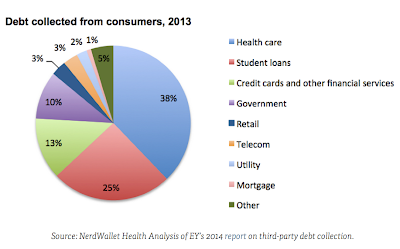 But don't just take my word for it, here's the "scoop" from Yahoo Finance:


When Deanne Overvold’s husband, Lee, started complaining of back pain late last year, she thought the painkillers his doctor prescribed would be the end of it. Five months later, a round of lab tests would reveal that Lee, 60, wasn’t just suffering from a backache — he was diagnosed with acute myeloid leukemia, a fast-moving bone marrow cancer.

“You never realize the cost of catastrophic illness until you’re in it,” says Deanne, 60. “It’s rather devastating to go from being able to pay the bills to wondering how you’re going to take care of the next month."

In their 30 years of marriage, the Overvolds had each taken on traditional household duties — Lee worked and managed the finances, while she cared for their two sons at home. At the time of his diagnosis, Lee earned $120,000 a year working in sales for an energy company in their hometown, Fontana, Calif. The rigor of his treatment regimen forced him to leave his job on disability, which cut the family’s income by 40%. Very quickly, his hospital bills consumed their emergency savings and the couple began drawing on his retirement benefits much earlier than expected.

“At least five of his cancer specialists weren’t covered by our insurance,” Deanne says. “And one day the hospital would charge $300 for one drug and the next day it would cost $750. It’s like it just keeps coming and you can’t stop it.”

Lee died in August, less than six months after his diagnosis. Deanne was left with more than $100,000 in hospital and physicians’ bills, she estimates -- an amount far too inadequate for her savings to cover. Six years away from reaching full retirement age herself, she’s begun looking for full-time work for the first time in more than two decades. On the recommendation of a friend, she enlisted the help of a financial advisor who specializes in helping widows and widowers.

“We had planned to retire at 67 and we had everything planned out,” Deanne says. “Now, there is no plan.”

Sadly, "there is no plan," describes this country's collective response to this crisis. Despite all of the Obamacare wankery that the idiot Republicans shriek about as if it is the end of the world, the program hasn't even done what President Hopey-Changey promised it would: make health care affordable for all.

As the chart above from the article shows, health care debt is now the number one form of debt collected from Americans, trumping mortgages by an astounding ratio of 38-to-1. For that kind of cash, one would think that Americans would enjoy an immaculate level of medical care rather than be besotted with an Orwellian, broken system that works great for rich people and those lucky enough to have good insurance but is an absolute nightmare for everyone else:


Medical debt triggers more than 60% of bankruptcy filings in the U.S. According to a September Bankrate survey, 44% of consumers making less than $30,000 a year say they have more medical debt than emergency savings.

As I stated in my recent posts about my battle with cancer, I am one of those fortunate enough to have "good" health insurance. And yet, even for me the co-pay I have to make for every office visit or procedure has increased in the past decade from $10 to $30 dollars, which is just a TAD higher than the rate of inflation. Still not that big a deal for me, but for someone making less than $30,000 a year per the above citation, that's not an insubstantial amount of cash, especially if they have a chronic illness that requires frequent attention.

During my cancer battle, I have hit the so-called catastrophic limit of $5,000 for each of the past two years, meaning that only about $10,000 of the roughly $500,000 my care has cost to date has been out of pocket. Sounds good, right? But even if that person making less than $30,000 a year was fortunate enough to have the same level of coverage I do (unlikely), that still represents more than 16.7% of their yearly GROSS income. To make matters worse, according to the article the amount of out of pocket expenses patients will have to pay are expected to increase by about THREE TIMES the rate of inflation over the next ten years.

So why is this problem just continuing to get worse? I've written here before about the staggering pay received by health care CEOs, but what it really boils down to is that health care has been turned into a commodity in this country. But it's a commodity in which the "consumer" has no real choice when they need to purchase it. It's either buy the hideously overpriced product, or live with the pain and discomfort of their illness if not die from it.

To make matters worse, there is ZERO chance our hideously broken political system will address the issue. Republicans and Democrats will continue to scream back and forth about the non-solution of Obamacare, the debate over which will serve its purpose of being a gigantic distraction for the masses as the those who rake in the obscene profits off of their fellow citizens' sickness and misery laugh all the way to bank.


Bonus: "You cannot run...and you cannot hide...from the wreck we've made of our house...from the mess inside"