Pension Benefit Guarantee Corporation is Heading into a "Perfect Storm" 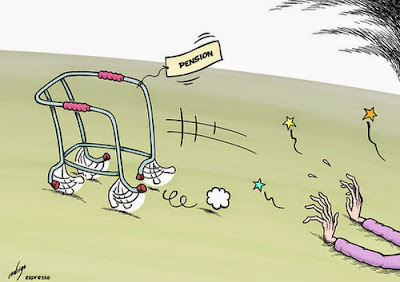 One interesting thing I've noticed after my nearly two-year break from blogging is how some of the worst economic news these days gets reported in such a hum-drum manner. You would think that a story as big as a near doubling of the Pension Benefit Guarantee Corporation's annual deficit would generate a huge amount of coverage given that the agency is all that stands between over 40 million retirees and the poor house. But no, you'd be forgiven if you missed it given that CNBC gave it exactly FOUR short paragraphs on its website:


The federal agency that insures pensions for about 41 million Americans saw its deficit nearly double in the latest fiscal year. The agency said the worsening finances of some multi-employer pension plans mainly caused the increased deficit.

At about $62 billion for the budget year ending Sept. 30, it was the widest deficit in the 40-year history of the Pension Benefit Guaranty, which reported the data Monday. That compares with a $36 billion shortfall the previous year.

Multi-employer plans are pension agreements between labor unions and a group of companies, usually in the same industry. The agency said the deficit in its multi-employer insurance program jumped to $42.4 billion from $8.3 billion in 2013.

By contrast, the deficit in the single-employer program shrank to $19.3 billion from $27.4 billion.

Sometimes it also helps to add a little historical perspective. Back in October 2011, I wrote about the the rising PBGC deficit, highlighting this factoid that was on Wikipedia at the time:

At the time, private pension underfunding was reported to have risen to the staggering total of $512 billion. Since then, as you can see above, PBGC's annual shortfall has accordingly nearly tripled in size, which doesn't bode well for the future.

There has been a lot of crowing in the financial media about the falling federal budget deficit (down these days to ONLY about $1 trillion annually). Looks like there is at least one federal agency that's going to be putting lots of upward pressure on that figure going forward.


Bonus: If you have a pension just relax, enjoy this upbeat little ditty and don't worry about where you'll be in five years' time