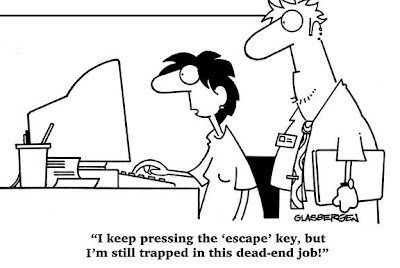 I've asserted here at TDS a few times that the quality of the jobs being created during our great and glorious economic "recovery" on average pay less and provide fewer benefits that the jobs that were destroyed during the 2008-2009 timeframe. Now comes the confirmation in a story published this week by Market Watch:


U.S. employment is still down almost 6 million jobs since the Great Recession began, and industry growth has been uneven during the recovery.

A July report from the National Employment Law Project, a New York–based advocacy group, found that while employment losses during the recession were concentrated in midwage occupations, gains during the early part of the recovery were greatest in lower-wage occupations. During the early recovery, there was relatively large employment growth in lower-wage jobs such as retail salespeople and office clerks, compared with losses in higher-wage occupations such as police officers, first-line supervisors, and managers of construction trades and extraction workers.

With almost 13 million unemployed workers, competition is intense, and some workers with new jobs are taking cuts in pay and responsibilities. Henry Farber, an economist at Princeton University in New Jersey, studied employment in the Great Recession, and found that job losers who found new positions earned on average 17.5% less in the new job.

Not one to nitpick there, Professor Farber, but "job losers" is a rather unfortunate term to use when describing these people.

But wait, lower wages aren't the only problem:


Good jobs are associated with good benefits, said Austin Nichols, an economist at the Urban Institute, a Washington-based think tank.

“There’s a widening gap between the haves and the have-nots,” Nichols said.

Given the staggeringly high price of health insurance these days, it is pretty much a given that the 8% of the workforce that has lost its employer provided health care has a lot less money to spend on other things if they are paying the full amount themselves. Or maybe they are not paying at all, which means they are just one serious health problem away from bankruptcy and destitution.

Nevertheless, hope still springs eternal, especially if you are a Harvard economist who doesn't actually have to work for a living:


The economy is just starting its jobs recovery, and it will take years for the full impact of the current administration’s policies to manifest in the labor market in areas such as health care and infrastructure, said Lawrence Katz, an economist at Harvard University. While Republicans deride President Barack Obama’s record, the economy would be worse without federal stimulus, Katz contended.

“We probably have several million more jobs today than we would have had,” Katz said. “Given the direction that things were going, I think the administration’s policies played an important role in preventing something that looked like the Great Depression. No matter how bad things are now it wasn’t as bad as it could have been.”

See, all it took was for the country to borrow over $5 trillion it didn't have in just over three years to bring us all the way back to where we are slowly creating shitty jobs with no benefits. Of course, the author of this piece didn't bother to ask the esteemed Professor Katz what will happen when the day comes that the federal government can no longer afford to engage is such wild reckless deficit spending. Being a Harvard economist automatically shields you from ever being asked to come down out of your ivory tower and actually observe how things are in the real world.

So this is where we stand today: an anemic economic recovery purchased with trillions of dollars borrowed from the future that will never be repaid, with skyrocketing gasoline and food prices putting ever more pressure on the poor souls who even if they have been lucky enough to find another job are making far less money than they used to. The Great Muddle continues on, as clueless economists like Lawrence Katz cheerlead for the rearranging of the deck chairs on The Titanic.