A Choice I Hope I Never Have to Make 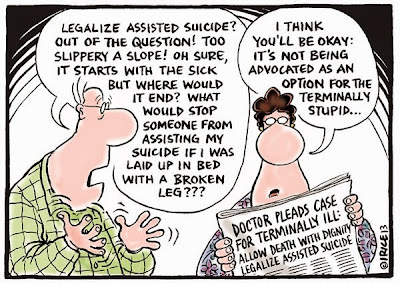 By now I'm sure most if not all of you have heard the amazing story of Brittany Maynard, the 29-year-old woman with terminal brain cancer who chose to end her own life while she still could rather than wait around for the disease to consumer her in its ugly, painful fashion. Maynard's situation really hit home to me because not so long ago I thought I might find myself in the same exact position, and I still might should my cancer return at some point. The dismal reality is that despite the "every day alive is a good day," happy talk, there comes a point where life really is no longer worth living. As someone who has suffered an intense amount of pain and discomfort the past two years, I'm not yet sure I know exactly where the threshold lies, but I think I have some idea. And for anyone who has not had the experience of being in excruciating pain and having been told by your doctors that you are expected to live for only X number more months who thinks what Maynard did was morally wrong, let me be the first to tell to please go fuck yourself with a very big stick.

Before I got sick, I knew two other people with terminal cancer who chose to to end their lives early. One was in her early 60s and was suffering the horrendous agony of having the disease slowly eat away at her spine. The other was a just-turned-40 young woman who initially appeared to have defeated breast cancer only to have the damnable disease return and metastasize. She made the courageous decision to stop receiving chemotherapy because she was told there was little chance it would be able to save her a second time and because the first go-around had made her life nearly unbearable.

During my own treatments I also saw people on the other side of the fence, those who continued to struggle despite there being little or no hope. While undergoing chemotherapy I made friends with Tom, a 59-year-old guy who had stage 4 esophageal cancer. Over the months I had chemo with him his condition continued to worsen. Tom was a big baseball fan, and my wife and I decided to use some connections we had to arrange for him and his wife to go with us to see what turned out to be his very last big league game, with the bonus that we were allowed to go onto the field during batting practice and meet some of the players. Several even signed a ball for Tom.

By the time of that game, however, Tom was already confined to a wheelchair, could not hold his head up without a neck brace, could barely speak above a whisper and was permanently attached to a colostomy bag. He ended up passing on about three months later, and the effusive thanks he and his wife expressed to us for arranging that special moment near the end of his life are something I will always remember. Nevertheless, as I observed him that night my thought was that it was great that he was having fun but I doubted I'd be able to stand to let my own condition deteriorate as far as his already had. Thankfully, to date it never has.

Allowing people to end their lives with dignity is a touchy subject in this country. On the cold, analytical end of the spectrum there's the figure that gets thrown about that says in America two-thirds of the average person's total medical expenses are incurred in the last year of life, which would seem to indicate a way that skyrocketing health care costs could be brought down but for the chilling thought of exactly who gets to make such decisions. On the other end are the fundamentalist religious freaks and right to life lunatics who if they could would force every patient to draw every agonizing breath for however long it takes until they mercifully expire. Because these fucking assholes shout the loudest, they make it nearly impossible to have a reasonable discussion about the right to die and the real necessity for legalized physician-assisted suicide.

Then along comes Brittany Maynard, bless her, a pretty young white woman with incredible courage who, dignity despite the media circus that surrounded her, was able to bring national attention to the issue in such a way that was basically impervious to all but the most unhinged criticism. Yes, it's a shame that the media won't pay attention to many social issues UNLESS a pretty young white woman is involved as the victim, but in this case we'll have to take what we can get. And what we got was an incredibly selfless act from a someone who allowed a huge intrusion into her private life at the worst possible time so that others in the future might be able to end their own lives with dignity and while experiencing as little physical pain as possible. I don't often cite heroes on this blog--mostly because I don't think there are a whole lot of genuine heroes left in this shitty world--but Brittany Maynard was a hero. May she rest in peace.


Bonus: No--suicide is NOT "the coward's way out"