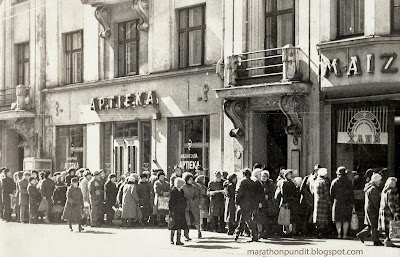 The Guardian published an interesting article the other day called, "As the Berlin Wall fell, checks on capitalism crumbled," the title of which pretty much tells the story:


The immediate cause for the collapse of communism was that Moscow could not keep pace with Washington in the arms race of the 1980s. Higher defence spending put pressure on an ossifying Soviet economy. Consumer goods were scarce. Living standards suffered.

But the problems went deeper. The Soviet Union came to grief because of a lack of trust. The economy delivered only for a small, privileged elite who had access to imported western goods. What started with the best of intentions in 1917 ended tarnished by corruption. The Soviet Union was eaten away from within.

As it turned out, the end of the cold war was not unbridled good news for the citizens of the west. For a large part of the postwar era, the Soviet Union was seen as a real threat and even in the 1980s there was little inkling that it would disappear so quickly. A powerful country with a rival ideology and a strong military acted as a restraint on the west. The fear that workers could “go red” meant they had to be kept happy. The proceeds of growth were shared. Welfare benefits were generous. Investment in public infrastructure was high.

There was no need to be so generous once the Soviet Union was no more. What was known as neoliberal economics was born in the 1970s, but it was not until the 1990s that market forces reigned supreme. The free market spread to poorer parts of the world where it had previously been off limits, expanding the global workforce. That meant cheaper goods but it also put downward pressure on wages.

What’s more, there was no longer any need to be inhibited. Those running companies could take a bigger slice of profits because there was nowhere else for workers to go. If citizens did not like “reform” of welfare states, they just had to lump it.

The whole article is well worth reading, except that in the second half it starts getting into potential "solutions" to counter the now unchecked rapacity of the world's predatory capitalist elites. The only real solution that could possibly change the status quo involves a violent revolution and overthrow of every government worldwide that has bought into the neoliberal economic policies that insist that enriching those at the top benefits everyone instead of the exact opposite being true.

But let's be perfectly clear about this--violent revolution is no more likely to happen in the West, especially in America--than it was to happen in the old Soviet Union. The Soviets kept the clamps tightly fashioned on dissent, just as is happening now in America. The only difference is that advances in technology and the increasing effectiveness of mass media propaganda means that (so far) our elites have generally not had to rely on tactics as heavy handed as those employed by the KGB in order to keep the masses in their place.

When the Soviet system did finally come apart it miraculously happened from the top-down after Premier Mikhail Gorbachev tried to "reform" the sclerotic Soviet command economy and failed miserably. To Gorbachev's undying credit, once he realized he had failed he did not try to cling on to power at the cost of a potential second Russian civil war, but allowed the Soviet Union to more or less peacefully collapse. It was an act almost completely unprecedented in world history, and the average Russian paid a steep price in terms of plunging standards of living as a result.

"Collapse" is also almost certainly the only way the current corrupt American system, which may not have any bread lines but is approaching late Soviet era levels of inequality between the elites and the masses, is ever going to cease to exist. The problem is that there does not seem to be any potential American Gorbachev out there who recognizes that peacefully dismantling the American empire, even at the cost of a huge drop in our own standards of living, would be preferable to maintaining the system until it experiences a violent collapse that will likely suck many millions of people into the maelstrom. In any event, even if an American Gorbachev did exist it is unlikely that he or she would be able, given how hopelessly selfish and entitled a majority of Americans are, to successfully "land this sucker" before it all goes kablooie.


Bonus: "Sweet communist, the communist daughter...standing on the seaweed water"