Lord Kitchener and "The Banality of Evil" 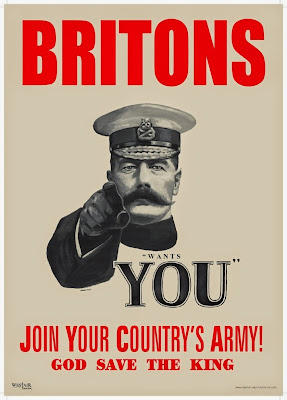 image: Uncle Sam is a piker compared to Lord Kitchener

"The banality of evil" was a phrase first used by political theorist Hannah Arendt to describe Nazi bureaucrat and key Holocaust cog Adolf Eichmann when the latter was finally put on trial for war crimes back in 1963. It arose from Eichmann's claim that what he had done in the service of of his country was not wrong because he was "doing his duty" and "just following orders." Arendt's thesis about Eichmann is summed up thusly:


Eichmann was not a fanatic or sociopath, but an extremely average person who relied on cliché rather than thinking for himself and was motivated by professional promotion rather than ideology. Banality, in this sense, is not that Eichmann's actions were ordinary, or that there is a potential Eichmann in all of us, but that his actions were motivated by a sort of stupidity which was wholly unexceptional. She never denied that Eichmann was an anti-semite, nor that he was fully responsible for his actions, but argued that these characteristics were secondary to his stupidity.

And as a result of such stupidity--the same kind of stupidity that is unfortunately all too common in our own country these days in such places as the Pentagon and Wall Street--did Eichmann become one of the most notorious names of the 20th century.

But what about those who are NOT stupid, and are NOT motivated by the desire for promotion? Those at the top who make decisions knowing damn well millions of people are going to suffer and be killed as a result, yet don't particularly seem to care? Are they not far more hideous monsters than the likes of Adolf Eichmann? After all even Eichmann's ultimate boss, Adolf Hitler, was not exactly history's brightest bulb.

My last post got me to thinking again about the First World War. Unlike the second global conflagration, the wake of World War 1 never saw any serious attempt to hold those whose decisions were responsible for slaughtering over 37 million of their fellow human beings responsible for their actions. And if one wants to talk about stupidity in power, one needs to look no further than the collection of hereditary monarchs and preening fools from Kaiser Wilhelm to British Prime Minister H.H. Asquith who were in charge of their respective countries when the war broke out. Most of these esteemed statesmen stupidly believed that the war would be short and glorious and that the troops would be "home by Christmas," as the popular expression went in those fateful early days of August 1914.

One reason so many of these so called "leaders" were so confident was because Europe had not seen massive continental warfare since the Battle of Waterloo ended the career of Napoleon almost exactly a century before. They truly could not envision (because they were stupid) the wholesale slaughter that modern industrial warfare inventions such as artillery, the carbine, the machine gun, the airplane and poison gas were going to precipitate everywhere from Flanders' "bloody fields" to the Gallipoli Peninsula.

But there was one man in particular who knew the horrible truth even before it all started: British Field Marshal Horatio Herbert Kitchener. Considered at the outbreak of the war to be "Britain's greatest living soldier," Kitchener had already had plenty of opportunities to see up close and personal what the rapid advance of military technology had wrought in the years since the Grand Armee's wave finally crested and broke in the burned out ruins of Moscow.

Kitchener had spent most of his career fighting colonial wars. He was particularly renowned for his victory in the Battle of Omdurman in Sudan, in which by training his Maxim machine guns on horseman charging with spears his forces killed 10,000 enemy soldiers and wounded 15,000 more while losing only 47 of their own. As author Scott Anderson put it in his fascinating book, Lawrence IN Arabia, during his career Kitchener had participated in more one-sided slaughters than probably any man alive. But because he had, Anderson adds, Kitchener also had a pretty good idea what would happen on a battlefield in which BOTH sides possessed the same level of superior military technology.

Thus, while the other idiots in the British cabinet that summer (to include Winston Churchill) were confidently predicting that the war would be over in months, or even weeks, it was Britain's greatest living soldier who sounded the very sobering and completely accurate warning. The war would drag on for years, Kitchener told them, and it would not end "until we have plumbed our manpower down to the last million." Needless to say, it was NOT a message the politicians running his country wanted to hear.

So, knowing what he knew about how the war was likely going to unfold what did Kitchener, whose word carried more weight with British public opinion in all matters military than even King George V, DO once it became apparent that the nation's "leaders" were determined to drive the country into the abyss? Did he resign in protest at a time in which doing so could possibly have halted the insane rush to war? Of course not. Instead, he allowed himself to be appointed Secretary of State for War. Almost immediately, Kitchener's became the very public face of the British war effort, as well as the drive to get young British men to voluntarily sign up to be led off to slaughter (the country did not resort to drafting soldiers until 1916, around the time of Kitchener's death).

Going back to Arendt and "the banality of evil," Kitchener was rare among the "leaders" of his day in that he was obviously not a stupid man. Nor at the time that he helped initiate what for his country was a war of choice knowing that it was going cause many millions of deaths was he likely motivated by the hope of professional promotion. In fact, Kitchener's ambition was to be Viceroy of India, not Secretary of State for War. So if Eichmann represents the "banal" figure who commits massive crimes against humanity because of a combination of burning ambition and no moral compass, what exactly does that make the likes of Lord Horatio Herbert Kitchener? Yet one is (rightfully) vilified as a monster while the other has an elaborate memorial monument permanently on display in St. Paul's Cathedral in London.

Bringing all of this forward to America in the present day, I doubt if I'll get too many arguments if I assert that our current "leadership" features countless figures who are in fact monumentally stupid. But perhaps the lesson we should keep in mind from the example of Lord Kitchener is that it's the rare smart ones who when they do appear that we should REALLY be wary of.


Bonus: "In the fields the bodies burning...as the war machine keeps turning"