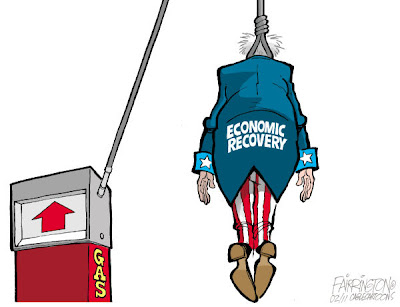 Thanks to a recent series of refinery and pipeline mishaps, gas prices are spiking again, and Spoiled Rotten Nation isn't happy about it. In fact, SRN is SO unhappy about having to pay more money at the gas pump that it is demanding government action to correct the problem. The call to arms was issued on Friday by one Patrick DeHaan of Gas Buddy.com:


The day when motorists see such rapid increases in gasoline prices is the day when it should be asked by lawmakers if there is enough spare refining capacity. That day should have been long ago.

The number of refineries have dwindled. Unstable margins have added into the risky future of expanding a refinery. The U.S. can require a certain amount of ethanol to be consumed and produced yearly, prompting hundreds of new ethanol refineries. But oil refineries? Nothing new in decades. Why hasn't the U.S. looked at oil refineries and the lack thereof in the volatile prices? It doesn't matter how much oil prices are or how much ethanol we produce- if we're still subject as a country to sticker shock like we're seeing- what's the point?

As I recall, the requirement of ethanol was supposed to drive us towards energy security. As long as there is conventional gasoline, there's no such thing. As long as we're subject to refinery fires and equipment malfunctions, all is pointless.

The bottom line, politicians, is that it doesn't matter how hard we try to become energy independent. It should start here at home with managing our refineries better, and building new state of the art facilities- just like the ethanol industry has been doing the past decade.

As a motorist, I'm disgusted that we're subject to every problem at a refinery, whether it be a fire, a control board failure, an equipment problem, etc. Let's get the act together. If we don't follow up, it'll cost this country precious GDP as more money goes to the gas pump, diverted from elsewhere in the economy. Wake up, politicians.

Holy shit...alert Michelle Bachmann and let her know that there is an good old fashioned Trotskyite writing for Gas Buddy.

I'm being only half facetious here. Mr. DeHaan is simply falling back on the typical reaction that nearly every American has when they are upset about something: the federal government must DO something...and now. The fact that oil companies are private concerns and that their decisions to build or not build refineries have NOTHING WHATSOEVER to do with government policy (other than the required licensing) nor the "politicians" he is desperately pleading for action from seems not to have crossed his mind.

To make matters worse, DeHaan confuses his demand for something to be done about America's supposed shortage of refining capacity with federal ethanol polices in which an entire industry largely exists because of corn subsidies and federal mandates. The government did not itself build any of the ethanol plants that are now consuming approximately 40% of America's corn crop each year and helping in this recent time of severe drought to drive corn prices into the stratosphere, it merely created the conditions to allow big agribusinesses to profit from the whole boondoggle.

Herein lies the very essence of Spoiled Rotten Nation, petulantly demanding that the government take action to allow its resource depleting and environmentally destructive happy motoring ways to continue indefinitely. It is also a big reason why there cannot be any serious debate about the very dire predicament we find ourselves in as the day of reckoning for our unsustainable "American way of life" approaches. The only redeeming quality in DeHaan's delusional article is that at least he didn't trot out the ridiculous notion sometimes asserted by conservatives that the utterly impotent environmental movement is responsible for preventing the rich and politically connected oil companies from building all the new refineries they'd want to build or drilling any hole anywhere they want were they so inclined.

The fact is, and this would be obvious to Mr. DeHaan if he stopped for a minute and thought this problem through rationally, that if the oil companies thought building new refineries was going to be at all profitable, they would be building them as fast as they could. The fact that they are not doing so tells you all you need to know about the reality of peak oil and whether the industry itself really expects there to be enough oil available in the future to keep the current number of refineries busy, let alone any new ones that they might bring online.

So, Mr. DeHaan, here is a little friendly advice from me to you and SRN: suck it up. Buy a hybrid. Move closer to your job. Take the fucking bus, already. Because it isn't going to get any better from here no matter how much you piss and moan, and there isn't and damn thing the politicians can do to help you.


Bonus: "You can say what you want to say...You can think what you think you want...It doesn't matter anyway...It's not funny anymore"