Why I Don't Care About the Chick-fil-A Controversy 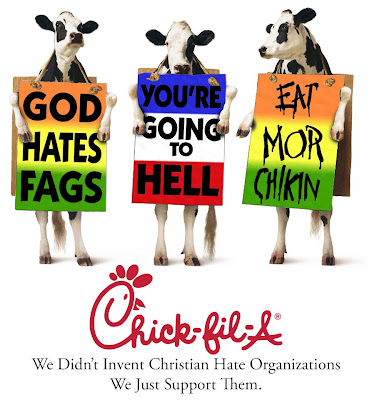 I was really trying to avoid writing about this latest stupid media-manufactured controversy, but since it apparently refuses to go away I felt compelled to say something. I just love how liberals and progressives in this country are so smug about how conservatives and reactionaries often whip up "fake outrage" about a particular issue to get their supporters all fired up, and then they constantly turn around and allow themselves get easily trolled by an opposition that is well versed in what buttons it needs to push to provoke a reaction. Pavlov could not have trained his dog any better.

The latest kerfuffle started when Chick-fil-A President Dan Cathy stated during an interview, "We are very much supportive of the family--the biblical definition of the family unit. We are a family-owned business, a family-led business, and we are married to our first wives. We give God thanks for that." Right on cue, pandering politicians like New York and Chicago Mayors Michael Bloomberg and Rahm Emmanuel jumped into the fray, hoping to deflect people's attention from how their policies help fuck over the working and middle classes by demonstrating their "strong" support for gay rights. Because when it comes to massive distractions, few issues are a bigger winner for the non-Republican scum who hold high office throughout the land. Sadly, as a "leftist" officeholder you can get away with pushing through pretty much any old corporation-enriching government policy just so long as you prove your "Kum-ba-yah" credentials to your wine-sipping, brie-nibbling, NPR-listening, Daily Show-watching core supporters.

The whole brouhaha makes me tired for one very simple reason: I hated Chick-fil-A long before that horrible company's president made his idiotic and bigoted statement. Let's examine for a moment what Chick-fil-A really is: a predatory corporation which sells shitty, unhealthy food that greatly contributes to obesity and death from more than 1500 ugly ass stores blighting the lanscape from coast to coast while paying its employees shit wages and having the balls to claim the moral high ground because it gives those same beleaguered employees Sundays off so they can go to church. The fact that the company's president doesn't support gay marriage is just the cherry on a gigantic corporate shit sundae.

Calling for a boycott of Chick-fil-A is particularly stupid. Fact is, if you are a liberal or progressive who really cares about social injustice, public health or the environment you shouldn't have been patronizing this shitty company to begin with, and all a boycott does is create a backlash that will make the reactionaries and conservatives more likely to go to Chick-fil-A for a crappy chicken sandwich instead of, say, Boston Market. In other words, a boycott will change nothing. Oh, and to those libertarians who are defending Chic-fil-A's right to be a bunch of homophobic assholes let me just say: fuck you. To paraphrase George Carlin, only in a nation of unenlightened half-wits would such a terrible company be able to thrive in the first place.

In the end, pointless arguments about Chick-fil-A's gay marriage stance actually serve to subtly legitimize it's horrible business model because in essence liberals and progressives are reduced to saying that it is all right to be a planet-raping, poison-dispensing, low wage-paying fast food chain just so long as you are nice to gay people. And once again through such meaningless distractions, the energy of the American left gets wasted on sheer wankery guaranteed to ensure that there will be no genuine social change in this country.


Bonus: "The clouds will part and the sky cracks open, and god himself will reach his fucking arm through, just to push you down, just to hold you down"