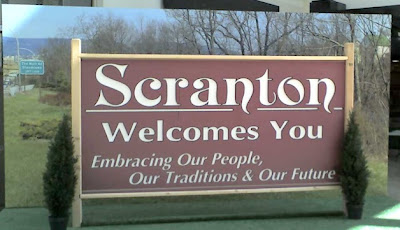 The recent story about the salaries of municipal employees in the cash-strapped city of Scranton, Pennsylvania, being slashed to minimum wage has caused quite a stir in certain circle of the Internet. From what I’ve read on various websites, there were a lot of different reactions to this development, most of them based on either partisan politics or ideology. Predictably, liberals and progressives were bemoaning yet another assault on middle class wages and calling for massive tax hikes on the one percent to close the gigantic budget imbalances being experienced by states and municipalities all across the country. On the flip side were the conservatives and the libertarians, crowing that the “fat cat” government workers, and more importantly those evil public employee unions, were finally getting their comeuppance and being subjected to the “market forces” from which they had heretofore so impertinently felt themselves completely immune.

It’s amazing how few people seem to understand the real significance of this story. Is there a coordinated effort on the part of libertarian billionaires like the Koch brothers to smash the public employee unions and thus breach the last real bastion of stable middle class employment left in America? Undoubtedly. Do public employees and their unions have a completely unrealistic expectation of what pay and benefits are “owed” to them at a time when real economic growth is coming to an end and we are entering the age of contraction? Absolutely. But in the end, I would argue that those are relatively minor concerns for most people.

I think much of the comprehension problem starts with the insular lives most Americans lead. This is really not so surprising in a country where only about one-fifth of the population holds a passport, and even the overwhelming majority of those who do have them have never travelled anywhere more exotic than Canada, Europe or some Caribbean resort. So allow me as one who has actually visited the third world to enlighten the Nativists regarding one basic fact that they are failing to consider: you do not in any, way, shape or form want to live in country where the government employees, especially those at the state and municipal level with whom you have to interact on a regular basis to obtain many of your basic services, are not being paid a living wage.

Imagine for a moment residing in a place where the police do not more or less keep the peace, which they currently do in the United States despite the occasional abuse of power, but are in fact another armed gang roving the streets, extorting money not just from the bad guys but from honest citizens, either dealing drugs themselves or protecting the drug dealers and making perceived troublemakers permanently disappear. Imagine living in a place where you have to pay a bribe for every service, from getting your water turned on, to getting your garbage collected, to obtaining a driver’s license, to getting the police to respond to a burglary of your home, to getting that gigantic pothole in the street in front of your house fixed, to obtaining a birth certificate for your newborn child. Imagine living in a place where every favor, including your ability to obtain and hold down a job, is doled out in exchange for your vote by unaccountable political bosses who are little better than gangsters themselves and who have thugs on the payroll to make sure everyone in the neighborhood toes the line. This may sound like the stuff of a dystopian science fiction novel, but it is in fact the grim reality faced by probably a majority of the world’s population every day of their lives.

It was also typical of what residents of America’s larger cities faced back in the late 19th and early 20th centuries, when there was no social safety net and political machines like Tammany Hall used patronage and favoritism to rule most city halls with an iron fist. Over the course of time many reforms were enacted that eventually crushed the power of the machines and stamped out the routine petty corruption that touched the lives of nearly every citizen, but perhaps the most important factor was the professionalization of government employment and the lifting of wages for municipal employees to the point where, say, taking small bribes from citizens in exchange for approving permits was no longer worth the risk of losing their jobs. If you think dealing with the DMV is bad now, just wait until the employees there are all toiling for minimum wage.

Once again, if you have read this blog with any regularity you know that I am not advocating that government workers be allowed to maintain their pay and benefits at a time when their private sector brethren are losing theirs. In fact, the recent failed Wisconsin recall election vote shows how easy it has become for billionaire elites to turn the resentments of one sector of workers against another and get them at each other’s throats. Personally, I am first and foremost a believer in the idea of SHARED sacrifice in this era of permanently declining available resources, even though I know there is no chance that such a concept will ever be adopted in this country as long as those same billionaires can engage in unrestricted political war against the very idea. All I’m saying is that those who might be tempted to dance in the streets in celebration of what is happening in Scranton, Pennsylvania, and will likely soon be happening in many localities, should not complain when in a few years they find themselves living in the crumbling and thoroughly corrupt hell that will constitute Third World America.