The Empire Will Eat Itself 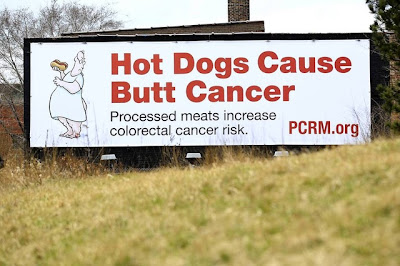 Yesterday was of course Independence Day in America. A day we celebrate in earnest even though many of us have no real fucking clue what it is that we are actually celebrating. It's a day when dozens of nimrods across this great land invariably blow off various body parts doing things with fireworks that they were never designed to do and challenging old Charles Darwin to take his best fucking shot.

If there is one single annual Fourth of July event that sums up just how badly America has gone astray, it would have to be the Nathan's Hot Dog Eating Contest held every year at Coney Island. Not so much the contest itself, really. After all, Coney Island was was always a place of seedy entertainment. No, it's the fact that it has become a major televised spectacle and has helped launch a professional sports league called, I shit you not, Major League Eating. That America's whole economy has become based on mindless consumption is bad enough, but now we've gone and made a major spectator sport out of it and put it on fucking ESPN.

In that spirit, I thought I would share this enlightening story from Deadspin, which attempts to answer the age old question, what happens when these guys have to poop after the contest?


The Nathan's Famous Fourth of July International Hot Dog Eating Contest is a lot of things—patriotic, promotional, repellant—but above all, the contest is a study in misdirection. Like so many of Coney Island's storied card sharks and freak shows, the contest succeeds by distracting its audience, plying them with sideshows between and around the twenty minutes of actual competitive consumption. Mookie Wilson, Greg Louganis and Miss New York dived into a 15-foot apple pie, somebody pulled a pick-up truck with his hair, MarShon Brooks played HORSE against a randomly selected crowd member. The action was deliberately brisk, but it couldn't vanquish my reasonable, pressing question, the question that would be on anyone's mind.

Every competitor I spoke to or heard speak yesterday maintained that they would not be throwing up at any point, before, during, or after the contest. Forget the skill and determination required to eat 50 or 60 hot dogs in 10 minutes: the true test of wills comes after that, when the media descends on the eaters in the Coney Island heat—an atmosphere that can turn stomachs even before Nathan's stuffs them.

Some competitive eater code dictates that they may not, under any circumstance, admit to feeling even a little nauseated. But they have to be. An eater must walk around for the rest of the day full—literally full—of hot dogs (packed, as an oppositional pamphlet reminded us as we left, "with fat, sodium and cholesterol"), the water they dunked them in, and what Major League Eating euphemistically calls "detritus," which is to say, chewed-up hot dogs they mistakenly spat out, but then had to re-swallow because otherwise they would have been docked points or disqualified.

But let's say the competitors were being honest about not vomiting. If all those dogs don't come out one end, they have to come out the other. So I sought answers. Do they race to the bathroom right away? If not, how long would it be until the post-contest dump? How does that dump compare to a regular dump? Do toilets get clogged? Are they just in the bathroom the rest of the day?

I found someone who I thought had been on stage—he was a bit of a mess, as eaters often are post-competition—and jabbed a tape recorder in his face to ask about his next shit. Part of me wishes that he had been a bystander, as I briefly feared, if only because that would have made his unhesitating response ("Not fun!") pretty amazing. But the eater in question was actually Micah "Wing Kong" Collins, ranked thirteenth in the world by Major League Eating. He once ate 84 ounces of baked beans in 58 seconds. The man presumably knows from shits, and yet, when pressed, he said his post-hot-dog contest evacuation would probably only take 10 or 15 minutes, and would likely occur about three hours from the time of our chat. Pretty standard stuff.

Lee Vilinsky, a first-time competitor who received lusty boos for having the temerity to be from Canada, echoed Collins' sentiments. Though he wouldn't say when, exactly, he could expect to rid himself of the day's work, Vilinsky speculated that the result would be "Not pretty."

Patrick "Deep Dish" Bertoletti seemed like a good candidate to give me more detail. The third-place finisher at 51 hot dogs, Bertoletti, who ate in a Speedo, seemed like the answer to a poop enthusiast's prayers. "There's Porta-Potties back there, I think they might just explode, to be honest." Alas, he was joking—apparently those Porta-Potties generally go unused. Bertoletti said he'd need a good eight hours before he had really digested the 51 dogs, and he was disinclined to predict size or intensity that far into the future. Bertoletti claimed to have "tons more space" in his stomach, and explained that what separates Chestnut from his competition is the ability to eat until he's at true capacity without succumbing to tangential roadblocks, such as throat soreness, or fatigue. I was more interested in the poop, but hey, spare a thought for Bertoletti: he ate 51 hot dogs in 10 minutes and still lost by 17. He needed to vent.

Runner-up Tim "Eater X" Janus, eater of 52 hot dogs (and burper of 18.1 seconds) grew contemplative when asked about his next poop. After a pause, he shook his head and said only, "You gotta live with the consequences of your actions." (We bet the average American hears this a lot on July 4.)

With four interviews in the books and the crowd dispersing, I'd only learned what the poops wouldn't be like: not fun, not pretty, not immediate, not inconsequential. Would I get any positive comment on what it's like to crap out scores of hot dogs? A media scrum formed around the only remaining eater, winner Joey Chestnut, who answered questions like, "How did you eat so many hot dogs?" very professionally ("I used my mouth") despite the sweat pouring from his body, and the fact that he'd just eaten 68 hot dogs in 10 minutes. Chestnut was dismissed after a minute or two and the scrum dispersed, but he stopped for one last question on his way out. Suddenly sheepish, I asked, "Mr. Chestnut, what will your next bowel movement be like?" Resplendent in victory, sweatier than anyone I've ever seen before in my life, Chestnut thought for a moment and then said confidently: "Picture-worthy."

Even better than the article was this delightful little nugget from the reader comments:


As the friend of a girl that dates one of the top three finishers and having attended the Nathan's private after party every year I can tell you that they all puke it up 100% of the time. Every contest, no matter the food. The euphemism is "vacating."

I have come to know way more about this "sport" than I truly ever cared to--the training involves drinking gallons of water regularly to expand the stomach but with the immediate need to puke it back up before suffering from water poisoning. The eater my friend dates has been in the hospital because he was "training" but didn't puke it back up in time. Water poisoning is apparently pretty serious. I Wikipedia'ed it.

Anyhow, the real funny stories come at this Nathan's after party every year--these guys are complete social outcasts that all the sudden become "stars" one day a year and totally act like douchebags for a night. But not like actual douchebags, like what nerdy kids think douchebags should act like. One of them always ends up getting shitfaced and being kicked out, only to have a gaggle of weird-ass eating groupies (not really all that attractive, but still--actual fucking groupies) attend to him on the curb. Then he usually pukes more.

In conclusion: they all puke. A lot.

The Founding Fathers would be so proud.


Bonus: This video isn't even a parody anymore.