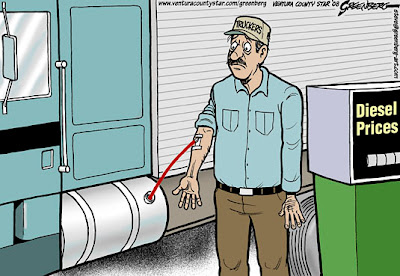 If the economy really is "recovering" maybe someone would care to explain this, as reported by Bloomberg:


North American heavy-truck orders are hitting a speed bump, with cancellations jumping to the fastest pace in about two years as a stagnating economic recovery prompts fleet owners to delay or scrap purchases.

The March rate shot up to 9 percent from 6.1 percent a month earlier, according to data compiled by Bloomberg. North American freight shipments fell 1.3 percent in March and grew less than 1 percent in April, according to Cass Information Systems Inc.’s Freight Shipment Index.
Buyers are being squeezed by slower cargo volumes, tighter credit and diesel fuel prices exceeding year-earlier levels even with recent declines. That may erode profits at truck makers such as Paccar Inc. (PCAR) and Navistar International Corp. (NAV), and damp the manufacturing rebound that has bolstered U.S. job growth.

It “creates a situation where these guys say, ‘You know what? I’m just going to hold on for a little bit and maybe cancel or move my order out a bit,’” said Eric Starks, president of Nashville, Indiana-based forecaster FTR Associates.

Preliminary April orders for Class 8 trucks added to evidence of a surprise slowdown by falling to the lowest since September 2010, according to FTR data. Continued weakening in orders may lower industry expectations, Peter Nesvold, a Jefferies Group Inc. analyst, wrote in a note to clients May 4.

That’s already happened at FTR. As recently as March, the firm was predicting Class 8 shipments of 285,000 units, or 12 percent more than a year earlier. It has since cut that estimate to 275,027 units, an 8 percent increase, as truckers delay purchases to refresh the oldest fleet since at least 1980.

Once again, which statistics do you trust, real world measurements like this or the politically charged data like unemployment and GDP that the media hypes relentlessly?
Posted by Bill Hicks at 2:19 PM