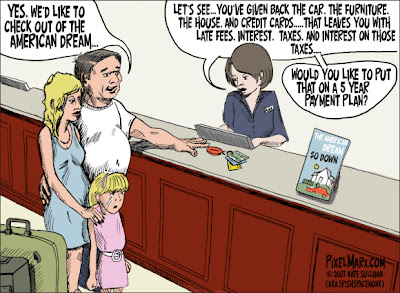 When even National Propaganda Radio begins to notice that the American Dream is on its last legs, its probably time to sit up and take notice. The following is a story that appeared on NPR's website this past week:


The American Dream is a crucial thread in this country's tapestry, woven through politics, music and culture.

Though the phrase has different meanings to different people, it suggests an underlying belief that hard work pays off and that the next generation will have a better life than the previous generation.

But three years after the worst recession in almost a century, the American Dream now feels in jeopardy to many.

The town of Lorain, Ohio, used to embody this dream. It was a place where you could get a good job, raise a family and comfortably retire.

"Now you can see what it is. Nothing," says John Beribak. "The shipyards are gone, the Ford plant is gone, the steel plant is gone." His voice cracks as he describes the town he's lived in his whole life.

"I mean, I grew up across the street from the steel plant when there was 15,000 people working there," he says. "My dad worked there. I worked there when I got out of the Air Force. It's just sad."

The American Dream is an implicit contract that says if you play by the rules, you'll move ahead. It's a faith that is almost unique to this country, says Michael Dimock of the Pew Research Center.

In the wake of the recession, that sentiment is now growing in this country.

"I think the American Dream for the average man doesn't exist any more," retiree Linden Strandberg says on a recent visit to the Smithsonian American History museum in Washington, D.C.

The Strandberg family story has been repeated millions of times in the last century. His parents immigrated from Sweden in the 1920s for economic opportunity. Linden grew up and worked at the phone company in Chicago for 35 years.

"I wasn't smart enough to go to college, so I wanted to get a steady job with decent pay," he says. "With my overtime I was able to buy a house, take trips to Europe and visit relatives there. I don't think a young person — woman or man — coming out of high school now could ever achieve that."

This sense that the contract is threatened intrigued political scientist John Kenneth White of Catholic University. "We have a lack of confidence by many Americans in the future of the country," says White, who edited a collection of essays called The American Dream in the 21st Century.

This crisis of confidence is not just because the economy is bad. In fact, the American Dream flowered at a time when the economy was at its worst.

"If you go back to the Great Depression where the American Dream originated as a concept, strikingly enough, there was still hope and optimism about the future," White says.

A Long History Of Optimism

In 1931, author James Adam wrote a book with the working title The American Dream. Ultimately it was retitled The Epic of America. Historians say that text marked the American Dream's emergence into the spotlight.

Yet the underlying themes had been bubbling up through the American psyche for much longer. In 1925, F. Scott Fitzgerald opened his iconic novel The Great Gatsby with these lines:

In my younger and more vulnerable years, my father gave me some advice that I've been turning over in my mind ever since. Whenever you feel like criticizing anyone, he told me, just remember that all the people in this world haven't had the advantages that you've had.

The American motifs of growth and optimism even stretch back as far as the Constitutional Convention.

"The chair in which Washington sat had a sun, and the question was asked, is it rising or setting?" White says. "And the framers answered that question by saying it's a rising sun."

At that time, the American Dream was not available to everyone in the country. Black people were kept as slaves. Women were not allowed to vote or own property.

The story of the 20th century is one of the American Dream gradually being extended to more of the population.

Composer Aaron Copland, a gay Jewish son of immigrants, captured the expansive optimism of the American Dream in 1942, in his "Fanfare for the Common Man."

Six years later, the gospel singer Mahalia Jackson expressed her faith that blacks will "Move on Up a Little Higher." The single became an overnight sensation — the best-selling gospel record to date.

In 2009, President Obama looked back across those decades as he took the oath of office. He described his inauguration as a fulfillment of the American Dream, where "a man whose father less than 60 years ago might not have been served at a local restaurant can now stand before you to take a most sacred oath."

While Obama embodies the American Dream in a powerful and specific way, this is a theme that every president and would-be president adopts in some fashion.

On the campaign trail, GOP presidential candidate Mitt Romney talks about how his father grew up poor. "Only in America could a man like my dad become governor of a state where he once sold paint from the trunk of his car," he says.

"Only in America" is a universal phrase in domestic politics. The challenge for politicians today is to convince Americans that the phrase still applies — that hard work and dedication still guarantee success.

As cynical as this may seem, the numbers suggest that the people most likely to believe in the American Dream today are those who've already attained it.

"There's a certain truth to that," Dimock says. "There are people struggling. And what you're seeing especially right now are people who feel like they played the game the right way, like they did what they were supposed to do, and the rules they thought they could play by and be OK have changed on them somehow."

Economic statistics validate those feelings. According to the Census Bureau, an average man working full time made 10 percent less money last year than he did a decade ago.

The question for this country is, can the dream be restored? And if it can't, what does that mean for our identity as Americans? Or, as the poet Langston Hughes put it, "What happens to a dream deferred?"

The answers to those last two questions the NPR reporter asks are of course, no, and we're fucked. That ought to be plainly obvious to anyone who is really paying attention to what is going on in this country. At this point it really is only hopeless optimism combined with the endless media propaganda and the atomization of our society that is thus far keeping the lid on as far as the eruption of mass social unrest. As this article indicates, that optimism is slowly fading for a whole lot of people.


Bonus: From my You Tube channel, a backhanded musical tribute to the American Dream