When You Slavishly Vote for One Party, This is What You Get 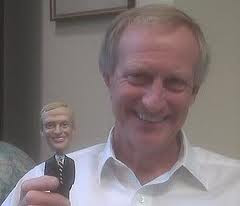 It ought to obvious by now to anyone who is paying attention that our political system at all levels of government is thoroughly corrupt. As a political office holder, about the only thing you can do these days that will get you thrown out on your ass is to engage in some kind of sex scandal. Otherwise, you’re pretty much free to rape and pillage the taxpayers at your convenience without fear of ever being held accountable.

Every now and then, the system will hang a nominal scalp on the wall, like it did with the utterly buffoonish former Gubbner of the Great State of Illinois, the epic hairpiece in a stuffed suit, Rod Blagojevich. But that’s mostly just for show. Blaggo had become such an embarrassment and a liability to the “legitimacy” of the system that he HAD to go down.

The reason creatures like Blaggo exist in the first place is due to the failure of a stupendously lazy and criminally uniformed electorate to do even their basic homework as to whom it is they are voting for each November. This problem is widespread across the country, but is particularly bad in locations where one of the two major parties holds electoral dominance over the other. In such locations, elections for the utterly safe incumbents have become merely an inconvenience as well as an excuse to raise gobs of campaign cash.

Few areas of the country have as big a problem in this area as does the District of Columbia. The local populace typically votes about four-fifths Democrat. The city has never elected a Republican mayor, and only rarely does the GOP even win a city council seat. This has led to spectacular embarrassments like the return of Marion Berry to the mayor’s office in the mid-1990s, just four years after the “bitch” so memorably set him up and he was sent to prison for drug possession.

Another long time DC politico is City Council member Jack Evans, a Democrat who has sat on the council for 20 years now, and has been regularly returned to office with around 80% of the vote. He is the very definition of a career politician who, because of a complacent partisan electorate, scarcely needs to lift a finger to win reelection. Perhaps that very arrogance and complacency is what led to an incident reported in the Washington Post this past weekend. Here’s an excerpt:


D.C. Council member Jack Evans has paid $135,897 for professional sports tickets over the past decade using money from his constituent services fund, renewing calls for tighter restrictions on the accounts, which are meant to help city residents.

The article goes on to state:


Local elected officials have said that they use the funds — also known as citizen service programs — to help needy constituents with rent and utility bills as well as unexpected expenses, such as funerals.

The records show that Evans spent $135,897 — about 31 percent of his total spending during the period — on tickets to the Washington Nationals, Washington Wizards, Washington Kastles and through the Washington Sports and Entertainment organization. By comparison, The Post identified $101,564 that Evans directed toward charitable organizations, neighborhood associations, arts groups or charitable activities, such as buying trophies for Little League teams.

Evans defended the spending. He said that he has bought season tickets to athletic events for years to help local sports franchises and that he gives away most of the tickets to Ward 2 residents and local schools and charities.

Just amazing. Evans gave more taxpayer money to the wealthy local sports team owners than he did to charity despite the fact, and I can attest to this as a local area resident, that there are a few needy residents who reside in the District as evidenced by the large number of homeless people you see on the streets. Even more amazing is that there are absolutely no rules in place to prevent Evans from doing this.

Evans’s excuse couldn’t be any lamer. Are we really to believe that the city's sports franchises can’t give out unsold tickets for charity without taxpayer money being involved? The answer, of course, is yes; apparently we are expected to be just that stupid. And this doesn’t even take into account the fact that the sports teams play in taxpayer-funded stadiums in the first place. Essentially what Evans is doing is giving even more taxpayer money to the wealthy sports owners, who I'm sure are happy to invite him to the owner's box during the games for a little wining and dining in grateful appreciation.

Now, is this the worst example of political corruption we’ve witnessed in America just in this past year alone? Not hardly, of course. Rather, this example is illustrative because it is in fact so routine and is not even against the law. I will also bet that similar examples of petty corruption occur nearly every single day somewhere in America.

If the voters of Evans’s ward were at all paying attention, he would rightfully be resoundingly defeated for reelection next time around. But I guarantee you they aren’t and he won’t be. It’s a tired old cliché in America that everyone hates the politicians. And yet, miraculously, most of them somehow manage to get reelected despite routinely engaging in disgraceful shenanigans such as this.
Posted by Bill Hicks at 6:55 AM