Peak Oil vs The Military-Industrial Complex 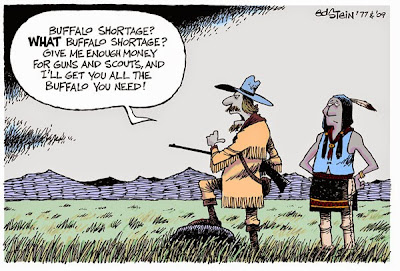 I just wanted to point out to my readers an excellent essay just published by Tom Engelhardt on his TomDispatch blog that seamlessly weaves together post-9/11 trends, including militarization of local police departments, NSA surveillance, the war on terror, wealth inequality and the corrosive effects of big money on American politics. Englehardt, who has been a strong antiwar voice since the buildup to the Iraq War, concludes thusly:


In sum, we, the people, are ever less in control of anything. The police are increasingly not “ours,” nor are the NSA and its colleague outfits “our” intelligence agencies, nor are the wars we are fighting “our” wars, nor the elections in which we vote “our” elections. This is a country walking back nothing as it heads into a heavily militarized future. In the process, an everyday American world is being brought into existence that, by past standards, will seem extreme indeed. In other words, in the years to come an ever-less recognizable American way of life will quite expectably be setting in the west. Don’t be shocked.

Shocked? Hardly. In fact, to a point I agree with Engelhardt whole-heartedly--it is utterly hopeless to expect that America will ever willingly change course from its current trajectory. Ah, but that's the one little thing he's missing: willingly. Because sooner or later the ever-militarizing American future is going to run headlong into the increasingly imminent danger presented by Peak Oil (and resource depletion in general) and the somewhat less imminent but still rapidly encroaching danger of environment degradation and climate change. In short, it will be the physical forces of nature rather than politics which will eventually be America's nemesis.

So how long it that going to take? Well, dear reader, if I knew the answer to that question I would immediately abandon this blog, take the money I've saved up over my lifetime and bet the markets accordingly.

In hindsight, we can now say the peaking of conventional crude oil in the middle of the last decade almost caused a worldwide economic heart attack in the fall of 2008 (via electronic bank runs) that was only halted by the bailouts and trillions of phantom dollars being conjured up and injected by the central banks into the world financial system. At the same time, the initial Peak Oil-related explosion in world oil prices caused an all out effort to exploit unconventional oil and gas through the tar sands, fracking and deepwater drilling that had not previously been economically viable. I think it is safe to say that without all that unconventional production, we'd already be well into the backside of Hubbert's Curve and the catastrophic economic collapse many Peak Oilers anticipated back in 2008 would already be well underway.

So where does that leave us? Well, instead of oil being increasingly scarce and gasoline shooting to $10 or more a gallon domestically (as so often breathlessly predicted), we instead have a bizarre situation in which the price of the world's most important resource is now dramatically whipsawing up and down while the central bankers continue to inject their largess into the financial system. Given the insane levels of debt, sovereign and otherwise, all over the world all that is preventing if not collapse at least extreme economic chaos is continued faith in the system. And that faith in the system remains unshakable for the vast majority of the population. Not surprising, really. What other choice do they have?

What we're left with is a horrible situation in which those of us who oppose America's ever more unjust big business, war and empire policies (and, relatedly, abhor the massive destruction being wrought upon the natural environment) are left with the grim realization that the only way those policies will ever be reversed is via a worldwide economic collapse that will ultimately result in the deaths of hundreds of millions if not billions of people. And it WILL be a worldwide collapse--the global economy is far too interconnected to enable any country to escape it once it really gets rolling. The most chilling sights I saw on my cruise were the numerous giant container ship docks we anchored near and the continuous stream of such ships transiting the canal, piled high as they were with all manner of boxed up goods. Seeing that massive volume up close served as a reminder that it is virtually impossible for anyone these days to truly "unplug" from it all.

That said, anyone with any sense should not be actively rooting for economic collapse (though I'll admit I can certainly understand why one might be tempted to do so). But as Tom Engelhardt so conclusively spells out, even without a collapse in the near term future that future is going to be quite grim indeed.


Bonus: "Hubris and greed...let the fossil fuels burn. No way to keep the wings in flight...when the turbine engines don't move"