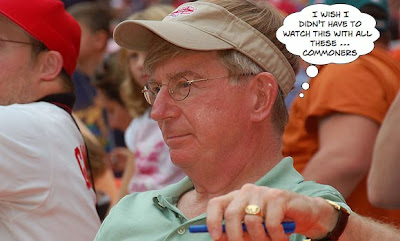 On September 12, 2001, in the wake of the worst terrorist attack on American soil, Washington Post columnist George Will wrote a famous opinion piece that helped set the tone in Washington for the nearly ten years of unfettered American militarism that has followed. Comparing America’s situation at the time to that of Israel’s, Will wrote:


“The acrid and unexpungeable odor of terrorism, which has hung over Israel for many years, is now a fact of American life. Yesterday morning Americans were drawn into the world that Israelis live in every day.

“Just at the moment when American political debate had reached a nadir of frivolousness, with wrangling about nonexistent ‘lockboxes’ and the like, the nation's decade-long holiday from history came to a shattering end. After about a half-century of war and Cold War, Americans came to feel, understandably, that the world was too much with them, and they turned away from it.”

Having thus chided his fellow Americans for sensibly being more concerned about what was going on within their own borders than overseas, the conservative scold goes on to write:


“To keep all this in perspective, Americans should focus on the fact that such acts as yesterday's do not threaten America's social well-being or even its physical strength.”

Leaving aside for a moment Will’s ridiculous notion that America had turned its back on the world during a decade in which it had intervened militarily in Kuwait, Somalia, Bosnia and Kosovo, it is that second passage that looks more and more laughably detached from reality with every passing year. Obviously, terrorism was never a threat to “America's social well-being or even its physical strength,” though our collective out-of-proportion response to it certainly has been to the former if not the latter. But where Will really gets it all wrong is in his assertion that America enjoyed its holiday from history during the ten years leading up to 9/11, when in fact it is far more accurate to say that from an energy standpoint America’s holiday from history actually lasted much longer, from 1981 to 2005.

Will’s great hero, Ronald Reagan, ushered in this American vacation from reality when he consciously decided to ignore the very clear warnings sounded by the oil shocks of the 1970s. Having defeated the haplessly gloomy Jimmy Carter, Reagan had the solar panels Carter installed on the White House roof removed--thereby symbolically turning his back on his predecessor’s attempt to alert the nation to its long term oil predicament. Proving the old adage that it is better to be lucky than good, Reagan was fortunate that as his presidency got underway the last supergiant oil fields in the North Sea, Alaska and Mexico were just then ramping up production.

By 1984, Reagan won reelection by proclaiming that it was Morning in America. With oil prices dropping back to their historic, inflation-adjusted norms and the economy rebounding from the malaise of the 1970s, Reagan was well on his way to being deified by conservatives, including Will, as the man who “saved” America. His overwhelming second victory set the tone for every presidential campaign of the next 20 years. No longer could any serious aspirant to the nation’s highest office publicly state that every year that passed with inaction on the energy front was causing the clock to run down on a ticking economic time bomb. Encouraged by their so-called “leaders,” including presidents of both parties, Americans blissfully enjoyed an additional quarter century of their cheap oil-fueled lifestyles, utterly oblivious to the looming threat.

The alarm finally went off in 2005 because of natural events that were actually more meteorological than geologic. World oil supplies were already beginning to tighten when Hurricanes Katrina and Rita slammed into America’s oil infrastructure in the Gulf of Mexico, sending gasoline prices soaring above $3 a gallon for the first time ever. Vacation was over and the school of hard knocks called reality was back in session. Unfortunately, even that awful event was not enough to shake us out of our complacency, and a couple of years later oil prices began their steady march to above $100 a barrel, helping to trigger the economic crash of 2008.

Ironically, the clueless Will inadvertently provided some sound advice in that very same column:


“There can be no immunity from these vulnerabilities, but that is not a reason for fatalism. A proactive policy begins with anticipation.”

He was, of course, still talking about our response to terrorism rather than the nation’s energy policies. But had he, as one of the alleged smartest people in Washington, and other prominent Inside-the-Beltway media figures held the nation’s leadership to account on energy issues instead of either ignoring the problem or toting the denier’s party line, perhaps there would have been no such American holiday from history, and perhaps we could have taken collective action back when there was still time to prevent a major economic catastrophe.

George Will is typical of Washington’s political punditry—an arrogant and smug believer in American Exceptionalism who camouflages his obsequiousness to power with fancy intellectual wordplay. As when he peevishly derided Obama’s high speed rail plan as promoting "collectivism" or when he referred to the "media manufactured alarm" about global warming, he and his ilk will continue to do all they can to reinforce public support for the big business, war and empire agenda until the day finally comes when geologic reality brings the imperial project crashing down in a heap around them. What this country really needs, and what we sadly will not get, is a vacation from the cornucopian rhetoric of opinion leaders like George Will so we can finally start to address the very serious energy issues that threaten this nation’s long term viability.
Posted by Bill Hicks at 6:38 AM